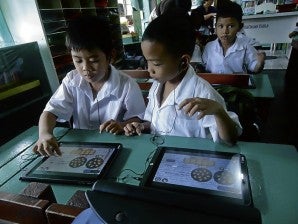 AGUJA students interact with each other as they learn on the math tablet.

The Philippines lags behind the rest of the world in mathematics and science expertise, as shown by Filipino students’ dismal scores in global tests like the 2004 Trends in International Math and Sciences Study.

Technology has been touted to fix education problems.  Open-source codes and open universities, PowerPoint presentations and iPads in class all make the most of technology.

Commercial software, including games, is trying to cash in on the urgent need of parents to raise their kids’ scores, of schools to supplement the lack of qualified teachers and of students to learn in a “fun” way.

But technology use in class is controversial. Studies in the United States show it can be linked to distracted behavior and attention deficit disorders.

In 2011, Science Secretary Mario Montejo wanted to create a viable math courseware and test whether it could make an impact on student learning.  With Science Undersecretary Fortunato de la Peña and Education Undersecretary Yolanda Quijano, I cochaired the project “Technology Package for Student Learning Empowerment.”

We worked to make the courseware neither too fast nor distracting, providing sufficient time for students to understand math concepts.

Several government units worked together:  The Science Education Institute (SEI) of the Department of Science and Technology (DOST) financed and monitored the project; the University of the Philippines National Institute for Science and Math Education wrote the lesson scripts;  the Advanced Science and Technology Institute provided hardware and software resources;  the Department of Education made possible the pilot testing of the material in public schools;  the Philippine Council for Industry, Energy and Emerging Technology Research and Development supported the production.

We decided to start with Grade 1 math, and deal with topics compatible with both the existing basic education and the proposed Kindergarten to Year 12 curricula.  Our courseware was meant to supplement—not replace—traditional textbooks, lessons and teachers.

Each lesson (in animation) opens with Filipino children, as the characters, encountering a situation that is best solved by math.  After the introduction comes Fixing Skills for students to deepen understanding, followed by a section on Evaluation to increase mastery of concepts.

For instance, in the lesson on Ordering Sets, characters are having a picnic. They decide to arrange the sandwiches, juice cans and fruits they have from least in number to greatest and vice versa.  Students “help” the characters do the required sequence by clicking on what they think is the right answer. 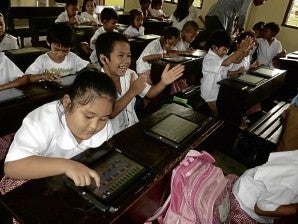 Students then go on to Fixing Skills where they have to arrange quantities not just from least to greatest, but also nearest to farthest (distance) and lightest to heaviest (weight).  In the Evaluation phase, students do more exercises to ensure mastery.

We also developed Teaching Support Material to guide teachers and procured tablets for the pilot testing.

Teachers were trained to use the courseware.  Two Grade 1 classes (with students of mixed abilities) were chosen in each school, one used the courseware, the other did not.  Other than this, conditions were similar for both groups:  Teachers, lesson, evaluation.

All students took a pretest.  One group supplemented lessons by using the courseware and going through the activities, with the guidance of teachers.  The other, the control group, followed the traditional classroom lesson plan, without the courseware.  Later, they all took a posttest.

The scores of the students who used the courseware soared, compared to those who did not.  Statistical tests showed we could be 95-percent confident the increase in scores was due to the courseware.

In short, the courseware was effective for practically all the students who used it.  After the posttest, the control group was finally allowed to use the courseware.

Students were excited to use the courseware.  Some were so enthusiastic that teachers found it difficult at times to manage the class.

Because of the Mother Tongue Law, English was still not taught in Grade 1, so many of the children could not understand the text.  But when the teachers translated it into the local language, the students quickly grasped the concepts.

We plan to have the courseware translated into various languages.  We also plan to create math courseware for Grades 2 to 6.