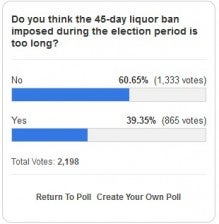 This observation is reflected in the results of the informal poll of the INQUIRER.net that asked readers whether they thought a 45-day liquor ban imposed during the election period would be too long. At present, the ban on liquor is enforced only on the eve of the election and on Election Day itself.

“The unfettered consumption of alcoholic beverages nationwide especially during this period does not aid intelligent discussion of election issues by our citizens,” Tolentino said in formally asking the Commission on Elections to extend the liquor ban from two to 45 days.

The Comelec, however, is cool to the idea.