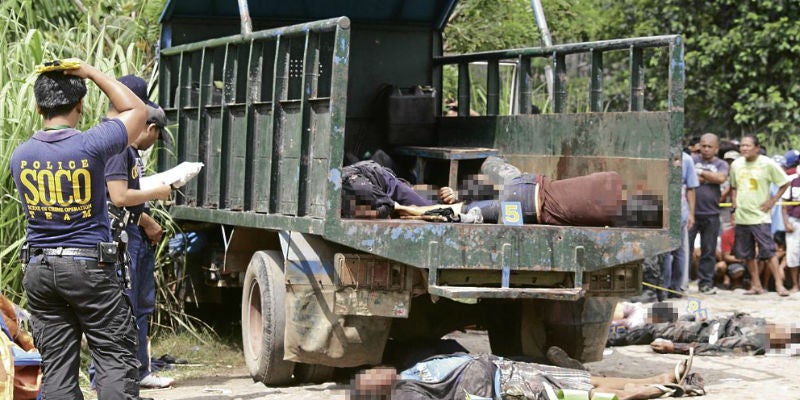 DEAD SPOT The bodies of nine people, including a policeman, lay on the ground and on the truck after they were ambushed by heavily armed men in La Castellana town in Negros Occidental. Nine others were reportedly wounded. PHOTO COURTESY OF THE PNP

BACOLOD CITY—Gunmen hiding in a sugarcane field ambushed early Sunday a truckload of policemen and village guards, killing nine and wounding nine others in a hinterland village at La Castellana town, 28 kilometers south of here.

Officials said about 20 gunmen raked the victims’ truck with automatic fire in Barangay (village) Puso in the foothills of Mt. Kanlaon in Negros Occidental province, firing nearly 300 rounds of ammunition.

Killed were a policeman, three village peacekeepers, two village guards, two men and a woman who were heading home after attending a village dance when the gunmen struck at around 3:45 a.m. on Sunday.

“Our policemen managed to return fire, but there were just too many gunmen firing away,” Supt. Celestino Guara, provincial police chief, said.

The military said the gunmen may have been communist New People’s Army (NPA) guerrillas.

One of the three police officers in the truck had received death threats over a land dispute, and his adversaries may have enlisted the help of the communist insurgents, Guara said.

Road blockades were immediately set up and government troops launched a manhunt for the gunmen, who fled toward a forest in the Kanlaon foothills.

Patrimonio said there were incidents of arson in Barangay Cabacungan, La Castellana, before Sunday’s attack.

He said suspected NPA guerrillas burned a cargo truck and a sugarcane field in the area.

Patrimonio said the guerrillas had been monitored fleeing the hinterlands of Guihulngan City, Negros Oriental, under pressure from sustained military operations in the remote areas of Isabela and La Castellana towns in recent months.

He said the NPA was also able to establish its influence in parts of the hinterlands of La Castellana.

But Col. Oscar Lactao, 303rd Infantry Brigade commander, said investigators were also looking into illegal logging as a possible motive as the ambush site was near the place where a forest ranger was killed.

Investigators said 20 people, including three policemen, village peacekeepers and guards, were heading home in a truck after securing a village dance festival in Puso, a mountainous area near the boundary of La Castellana and Canlaon City, Negros Oriental, when the gunmen opened fire on the vehicle’s front to stop it.

Killed in the initial fire was Ricky Dingcong, the truck driver.

Resuma said there were no reports of sightings of armed men in the area before the ambush.

La Castellana Mayor Alberto Nicor condemned the attack, which he described as “inhuman.”

Some of the victims may not have died outright but were finished off with shots to the head, as indicated by empty cases for .45 cal. bullets recovered from the scene of the attack.