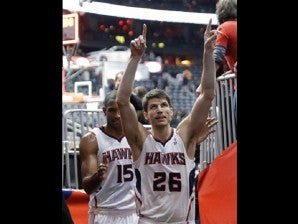 Atlanta Hawks guard Kyle Korver (26) gestures as he leaves the court after an NBA basketball game against the Boston Celtics on Friday, Jan. 25, 2013, in Atlanta. At left is Al Horford. Korver scored 27 points to help Atlanta win 123-111 in double-overtime. AP

ATLANTA — Kyle Korver scored 27 points and the Atlanta Hawks overcame a 27-point deficit in the first half to beat Boston 123-111 in double overtime on Friday night, handing the Celtics their sixth straight loss.

Jeff Teague had 23 points for Atlanta before fouling out in the first overtime. Al Horford had 24 points and 13 rebounds. Josh Smith, who opened the second overtime with a three-point play, had 17 points and 14 rebounds.

Kevin Garnett had 24 points and 10 rebounds but fouled out in the second overtime as the Celtics were left with their longest losing streak in six years. Rajon Rondo had 16 points, 11 assists and 10 rebounds for his fifth triple-double of the season.

Korver had all of his career-high eight 3-pointers in the second half, setting a franchise record, and five in the fourth quarter.

DALLAS — Tony Parker returned from a cut above the same eye he injured in a nightclub incident last summer and scored 23 points to lead San Antonio over Dallas.

Parker missed about a quarter in the first half when he took three stitches above his left eye after a collision with Elton Brand on a drive. He nearly lost the eye in June when shards of glass embedded in his cornea after he got caught in a bottle-throwing melee in New York.

Tim Duncan stayed home with a sore right knee, but DeJuan Blair made up for his absence by scoring a season-high 22 points.

Rodrigue Beaubois led the Mavericks with a season-high 19 points.

MIAMI — Dwyane Wade scored 29 points and sparked a pivotal run to help Miami earn its fourth victory in a row by beating Detroit.

After falling behind by nine points, the Heat outscored Detroit 26-4 during a seven-minute stretch in the second quarter to take a 60-47 lead. Wade scored 15 points during the spurt.

LeBron James had 23 points, seven rebounds and seven assists for the Heat, who shot 56 percent. Over the past two seasons, they’re 34-2 when shooting at least 50 percent.

CLEVELAND — Kyrie Irving scored 35 points and Cleveland rallied from a 20-point deficit in the third quarter to defeat Milwaukee.

Irving, voted an Eastern Conference reserve for next month’s All-Star Game in Houston on Thursday, scored 16 points in the third quarter to help Cleveland get back in the game. He added eight points down the stretch as the Cavaliers posted back-to-back wins for only the second time this season.

Cleveland, which trailed 79-59 midway through the third quarter, took a 96-95 lead on a 3-pointer by newly acquired Wayne Ellington with 6:31 to play. The basket was his first since joining the Cavaliers from Memphis on Tuesday, and it gave Cleveland the lead for good.

WASHINGTON — John Wall had 14 points and five assists in his first start of the season, and lowly Washington finally hit double digits in wins.

Wall, who came off the bench for the first seven games after his return from a knee injury, had assists on the Wizards’ first two baskets in a game in which Washington never trailed. He wowed the crowd with a nice spin move for a layup late in the first half and went 6 for 10 from the field in 21 minutes, his playing time still limited after missing 33 games with a stress injury to his left knee cap.

The Wizards are 5-3 since Wall’s return after going 5-28 without him. They’ve won four straight at home and no longer sit at the bottom of the NBA, their 10-31 record a half-game better than the Charlotte Bobcats’ 10-32.

Nate Robinson added 22 points off the bench in the Bulls’ third straight victory.

Jimmy Butler had 16 points and a career-high 12 rebounds starting in place of All-Star Luol Deng, who missed his fourth consecutive game due to a right hamstring injury.

Carlos Boozer and Joakim Noah, the Bulls’ other All-Star selection, also finished with double-doubles. Boozer had 15 points and 13 rebounds and Noah had 14 points and 16 rebounds.

MEMPHIS, Tennessee  — Marc Gasol had 20 points and nine rebounds and Memphis built a 30-point lead in the second half en route to a victory over Brooklyn.

Gasol was 10 of 15 from the field, all of his points coming in the first half, as Memphis, which had seven players in double figures, won for the fourth time in the past five games.

Mike Conley made six of seven shots, including 2 of 3 outside the arc, for 14 points, while Zach Randolph had 12 points and matched Gasol’s nine rebounds.

Rudy Gay, Jerryd Bayless and Tony Wroten scored 11 apiece, while Chris Johnson, on a 10-day contract with Memphis, had 10 points.

NEW ORLEANS — James Harden had 30 points and Houston broke out of its worst slump of the season by beating New Orleans.

The Rockets, who had lost eight of nine and trailed by double digits in 12 straight games, led almost all the way this time. Harden scored 10 points and Patrick Patterson had six during a 16-2 run early in the third quarter as Houston took control, going ahead 64-46.

The Hornets never got closer than 10 the rest of the way, losing for only the third time in their past 10 games.

Patterson added 18 points and a season-high 13 rebounds. Jeremy Lin had 13 points and eight assists for Houston.