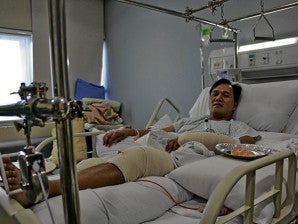 Supt. Hansel Marantan, the ground commander in the Jan. 6 shootout in Atimonan, Quezon, insists the operation was not a rubout during an interview at St. Luke’s Medical Center at the Global City in Taguig. MARICAR P. CINCO / INQUIRER SOUTHERN LUZON FILE PHOTO

MANILA, Philippines – Assisted by two lawyers, Superintendent Hansel Marantan submitted a four-page affidavit to agents of the National Bureau of Investigation on Friday.

“We didn’t ask him any questions. He just submitted his affidavit,” NBI special investigator Frederico Criste told reporters after emerging from the Philippine National Police Hospital where Marantan is now confined.

Marantan will undergo therapy for gunshot wounds he sustained in the controversial Atimonan incident in Quezon province on January 6 that raised  many questions,  even some from President Benigno Aquino III, who ordered the NBI to investigate the alleged shootout.

Aquino told the Philippine Daily Inquirer in an interview earlier this week that he wanted an “unassailable” report by the NBI. The President also admitted meeting with military and police officials in the aftermath of the killings but declined to mention who the officials he met were and what they discussed.

He said he would rather wait for the NBI report before talking about his meeting with the security officials.

Thirteen people were killed, including a police colonel, his two aides, two Air Force men, and Victor “Vic” Siman, an alleged jueteng operator with an axe to grind against Marantan.

The NBI investigators led by Danielito Lalusi and Criste arrived at Camp Crame late Friday afternoon and proceeded to the hospital, where they stayed for some 30 minutes.

From the hospital they made a short walk to the Kiangan Hall, a lodging place for policemen, where 20 of the 22 policemen facing administrative charges in connection with the Atimonan killings are billeted. They stayed another half hour there.

Lalusi said that 10 policemen, including Marantan, submitted their affidavits on Friday.

“They are all very cooperative,” Lalusi said, adding that of the 22 policemen involved, only one has yet to submit his affidavit because he has yet to consult with his lawyer.

Lalusi said the policemen’s affidavits would help the NBI determine the position of each policeman at the scene as investigators are reconstructing the incident—what happened before, during and after.

“We got their statements to find out what was the participation of each one. The investigation cannot be a sweeping one. We have to find out from each soldier and policeman where they were at that time and their individual participation,” said Criste.

Criste said NBI agents have also spoken to the members of the Army’s Special Forces who were part of an augmentation team requested by the police on January 6.

Fifteen soldiers are now restricted to quarters at the Army Headquarters in Fort Bonifacio.

“They [soldiers] gave a factual account what they saw and what they heard,” Criste said.

Armed Forces Chief of Staff Lieutenant General Emmanuel Bautista, asked if the Special Forces officers and men would face administrative charges, told the Inquirer in a text message that the military was waiting for the results of the NBI investigation.

“Our SF troopers concerned are still placed on restricted-to-quarters status for the purpose of the ongoing investigations of the NBI.… Since they are restricted to quarters, they cannot go on operation nor undergo training exercises,” Armed Forces spokesman Colonel Arnulfo Burgos said.

The soldiers’ leaves and rest and recreation privileges have also been cancelled, he added.

Burgos said the Special Forces troopers “will be made available each time the investigating authorities summon them to appear for questioning.”