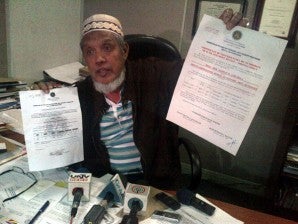 Comelec Commissioner Elias Yusoph shows to reporters the difference between a fake certificate (left) which uses an old format and an original certificate (right), which has a new format and contains three signatories. MATIKAS SANTOS/INQUIRER.net

Commissioner Elias Yusoph announced that his office found a fake certificate of authority for gun ban exemption brought by a concerned citizen who wanted to verify its authenticity.

“I am warning the public that there are certifications that are faked, [I am also] cautioning the PNP and AFP manning Comelec checkpoints to check strictly the gun ban certifications,” he said.

“Somebody came to this office to verify the certification [and] we found it unusual because we require three signatures from [myself], Chief Superintendent Miguel Antonio and Brigadier General Rodelio Santos, but in the certificate it appears that I am the only one who signed,” Yusoph told reporters.

Yusoph is the chairman of the Comelec Committee on the Ban on Firearms and Security Personnel for the May 2013 midterm elections.

Yusoph said that it was immediately found by the secretariat to be fake because it was using an old format and only had one signatory.

The new form uses a different format and requires three signatories, that of Yusoph and his counterparts in the Philippine National Police (PNP) and the Armed Forces of the Philippines (AFP).

The fake certificate was in the name of a certain Camid Oranto, a resident of Maharlika Village, Taguig City. It was issued on January 23, 2013 and was for a .45 caliber Armscor pistol with serial number 1091378.

Also included with the bogus certification was a fake official receipt dated January 21, 2013 for P1,200.

Yusoph said that the current certification fee for a gun ban exemption certificate was P5,000. They also have a new format for the official receipts, he added.

He also said that original certificates use a security paper that has markings so that only Comelec can verify it.

Yusoph called on the public to immediately report any person offering certificates of authority for Comelec’s gun ban exemption.

“These people have nothing better to do in their life so they are doing this for a living,” Yusoph said. “Do not rely on fixers.”

He urged people with fake certificates to immediately surrender to the Comelec and point to wherever they got them, otherwise they might be the ones who will get caught.

“Whoever is in possession of a faked document is presumed to be the author,” unless they can point to where or who they got it from, Yusoph said.

Anybody found with a falsified document could face charges of prison mayor or up to 12 years imprisonment, he said.

Law enforcement authorities who find this fake certificate must apprehend the bearer otherwise they would face dereliction of duty.