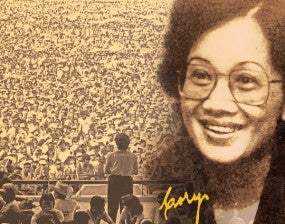 In her lifetime,  former President Corazon Aquino was wont to tell her staff that they need not visit her grave when she’s gone.

Aquino was supposed to have spoken those words  every time she asked her staff  to join her at the grave of her husband,  Benigno “Ninoy” Aquino Jr.,  on his martyrdom on Aug. 21,  his birthday on Nov. 27 and even during the Edsa People Power Revolution anniversary in February.

“‘When I go, you don’t have to do this,’ she used to tell us. But this is her 80th birthday. So we are going,” Margie Juico, Aquino’s former social secretary, said on the telephone Thursday.

Juico, chairperson of the Philippine Charity Sweepstakes Office (PCSO),  said members of Aquino’s former Cabinet and staff, relatives and friends will gather at her grave site at Manila Memorial Park in Parañaque City for Mass around 11 a.m. Friday to mark her birth anniversary.

Celebrating her legacy is now possible with  a click of the mouse.

To mark the birth anniversary of “the undying symbol of our nation’s freedom,” Malacañang is making public on Friday some events that defined her presidency through the online Official Gazette (www.gov.ph).

The Palace is uploading to the Official Gazette the full report of the Davide Commission which investigated the 1989 coup attempt against her, and an official Presidential Management Staff narrative titled, “The Aquino Management of the Presidency: In face of Crisis.”

At a press briefing Thursday, presidential spokesperson Edwin Lacierda said that as a “tribute to her unshakable determination to defend our hard-earned democracy,” the Presidential Communications Development and Strategic Planning Office would also publish a multimedia historical series on Aquino “as Commander in Chief and defender of the Fifth Republic.”

Lacierda said Filipinos here and abroad could join in the commemoration by poring over the narratives and watching a multimedia presentation on Aquino’s legacy.

“This online observance seeks to perpetuate the greatness of the Filipino people personified by the widow, dressed in yellow, who defended and nurtured our democratic institutions that she and countless Filipinos restored and rebuilt,” Lacierda said.

“A generation after our newly restored democracy faced some of the most serious and bloodiest challenges to democracy and civilian supremacy, we pause in homage to the soldiers and civilians who lost their lives in defense of constitutional government,” he said. “Let us never forget those who died so that democracy may live.”

With President Aquino currently in Davos, Switzerland, for the World Economic Forum, the Aquino family is holding a “private” commemoration of her birth anniversary, Lacierda said. He did not elaborate.

Cory Aquino’s death in 2009 brought back memories of the People Power Revolution she led in 1986 that dismantled the Marcos dictatorship. On her third death anniversary last year, Lacierda praised her for being the nation’s “moral compass.”

“Corazon C. Aquino, whom most of our countrymen called ‘Tita Cory,’ was a gift bestowed upon a grateful nation who we will never forget,” Lacierda said at the time.

“As a widow dressed in yellow, her soft-spoken and honest dedication to the struggle to win back our democracy by peaceful means earned her the respect of an empowered nation and the international community.”

When President Aquino visited Australia last October, his late mother was honored at a banquet hosted by Prime Minister Julia Gillard, who recalled that then Australian Prime Minister Bob Hawke was one of the first foreign leaders to visit Manila following the Edsa uprising.

“He (Hawke) still speaks with deep respect of your mother, recalling …  your family’s generation of patriotic service,” Gillard said.

On Friday, in Manila, a wreath-laying ceremony at 8 a.m. and a speech from senatorial candidate Paolo Benigno “Bam” Aquino IV, a nephew of the democracy icon and a cousin of President Aquino, will mark the late President’s birth anniversary.

“We always commemorate her birthday and death anniversaries out of respect [for her] and for other officials to emulate what she has done, which is really exemplary,” Manila Mayor Alfredo Lim told the Philippine Daily Inquirer. “She always said that we should give clean, honest and dignified service to the people.”

“We have the highest respect for her because of her steadfast conviction to serve the interest of the public.  Not once was her name involved in any anomaly,” Lim said.

Lim recalled that Cory Aquino’s advisers had encouraged her to run for president again in 1992 but she refused. “She said, ‘My only purpose in running for the presidency was to restore our freedom and democratic processes,’ which she did.” With reports from Erika Sauler and Rogelio Medina

Read Next
Lacson rues: We’re all losers
EDITORS' PICK
Do all the things you do, faster
Luis intensifies into a severe tropical storm; now outside PAR – Pagasa
POGOs not linked to Illegal online gaming, says Pagcor
Metro Manila now at moderate risk for COVID-19 — DOH
House energy committee chair Arroyo bats for cheap electricity
Peeking inside the superb night camera features of the vivo V25 series
MOST READ
Don't miss out on the latest news and information.