Enrile: I don’t look old but… 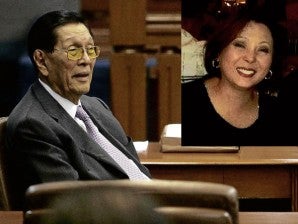 Jessica “Gigi” Reyes is Senate President Juan Ponce Enrile’s trusted hand, his eyes and ears but not his girlfriend.

In an early morning talk show Thursday, Enrile addressed what Sen. Alan Peter Cayetano insinuated in a privilege speech on Wednesday was the unusual influence that Reyes, as chief of staff of the Senate President, had in the upper chamber.

“I leave my things to her and nothing will happen. I have poor (eye)sight because I am suffering from macular degeneration and because of the details that come into my office, she is the one doing the reading for me,” Enrile said in the TV program “Unang Hirit.”

“So, if they are implying that she is my girlfriend, well, I am too old for that. My God!” he told interviewer Winnie Monsod.

Enrile, who is turning 89 on Valentine’s Day, said that while he did not look old, he was no longer as sprightly as when he was young, especially “from the waist down.”

“Mr. Senator, are you willing to be tested for erectile dysfunction?” Monsod pressed.

Enrile denied Cayetano’s allegation that Reyes, 50, who joined his law firm after finishing law at the University of the Philippines and passing the bar in 1988, was acting like one of the senators during their caucuses.

“That is not true. You know, whenever our staff is required [in a caucus], we ask permission. The secretary general is there, the staff of the secgen would be there, I request my COS because she knows the details of everything that goes in my office,” Enrile said.

“She is my administrative officer. I could not possibly know these details because I am dealing with the major problems of the Senate, the needs of the senators and the political side of the Senate and the major decisions that have to be made in the Senate.”

Asked if Reyes was the only outsider allowed in the caucuses, Enrile said: “No. There are many persons there. Even the security guards of the Senate are there, even the waiters.”

“Even those who serve coffee. When I request my legal officer of the Senate, the COS of anybody or the secretary general, my COS, I seek the permission of the others. But unfortunately, these people come very late in caucuses,” Enrile said.

It was the second time in 15 years that Enrile publicly denied having an affair with Reyes. In January 1998, he issued the same denial to the Inquirer amid wildly publicized rumors that he was separating from his wife Cristina.

Sen. Panfilo Lacson, the chairman of the Senate committee on accounts, said Thursday he did not find anything wrong with Reyes signing checks and issuing handwritten instructions on behalf of Enrile, if this was authorized by the Senate President.

Lacson’s committee deals with all matters relating to the auditing and adjustment of all accounts chargeable against the funds for the expenses and activities of the Senate.

“If it was really her who made those handwritten instructions, it would seem there was an overstepping of power except, of course, if she was authorized by her principal,” Lacson told reporters.

“Like the executive secretary, for example, by the authority of the President, he can sign or he can even jot down some handwritten instructions to Cabinet members and other heads of agencies,” he added.

Lacson said Reyes was not the only nonsenator present during the senators’ caucuses.

“Even…. the other Reyes, Emma [the Senate secretary], is also there. There are instances when senators need materials and resource persons because we don’t know all the issues. They have all the documents and other details so we have to consult them,” Lacson said.

“[Gigi Reyes] is usually there but not all the time,” Lacson said. With Karen Boncocan, INQUIRER.net