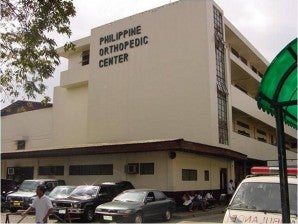 MANILA, Philippines–A lawyer on Thursday questioned the confidentiality surrounding the bidding documents for the P5.6-billion modernization of the Philippine Orthopedic Center.

In a letter dated Jan. 21, 2013 to Health Secretary Enrique Ona and Undersecretary Teodoro Herbosa, chairman of the Modernization  of Philippine Orthopedic Center Project, lawyer Ernesto Francisco demanded the release of the bidding documents for the project.

“The public has the right to know and participate in the process of putting up a new orthopedic center and the other government hospitals which the DOH is planning to put up with the participation of the private sector,” Francisco said.

Francisco demanded that the entire set of Bidding Documents of the MPOC be uploaded on the DOH website and made available to the public.

President Benigno Aquino III approved the project in September 2012. The new 700-bed Philippine Orthopedic Center will be built adjacent to the Philippine Heart Center and the Philippine Lung Center.

Seventy percent of the beds will be for use of PhilHealth members and indigents, while the remainder will be for paying patients, he said.

Francisco, in his letter, said he was alarmed by the provision in the invitation to qualify and to bid that the bidding documents would be issued to prospective buyers upon execution of a Confidentiality Agreement and payment of non-refundable fee of P250,000 in a check payable to the Department of Health.

“This twin-requirement, in effect, bars the public from having access to the bidding documents and knowing everything it needs to know and has the right to know about the said project,” he said.

“But this project is a government project that will involve the expenditure of public funds and use of government resources and more importantly, of utmost concern to the public since this involves the rendering of a very essential service by the government to the public – the provision of medical care, services and facilities,” he added.