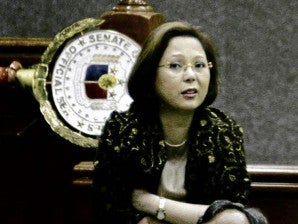 Dubbed by the gossips  in the Senate as the “24th senator,” Jessica Lucila “Gigi” Gonzales-Reyes signs checks in the millions on behalf of Senate President Juan Ponce Enrile and  issues memos to Senate functionaries involving the funds of the chamber.

Enrile’s chief of staff also is allowed in the exclusive Senate lounge to hobnob with the senators.  She also attends Senate caucuses where she “can speak her mind and join the discussion,” Sen. Alan Peter Cayetano said in his privilege speech Wednesday.

Reyes’ brother, Patrick, also works in the office of the Senate President. Cayetano said to get to Enrile, you have to go through Gigi or Patrick.

So, who’s this Gigi Reyes, and why was she the star of Cayetano’s privilege speech?

The Chicago Tribune reported 15 years ago that Enrile’s wife Cristina walked out on him in January 1998  after charging adultery.  The Tribune also reported that the “other woman “ was Gigi Gonzales-Reyes, Enrile’s chief of staff,  about 30 years his junior.

Enrile and Reyes, the Philippine Daily Inquirer has learned,  met shortly after Reyes graduated from the University of the Philippines College of Law in 1988 and joined  the law firm of Pecabar (Ponce Enrile, Cayetano, Reyes and Manalastas).

“As  chief of staff, we respect Ma’am Gigi. We allow her inside the lounge even if it’s off-limits to members of our staff because she’s helping the Senate President,” Cayetano told reporters a day after the usually reticent Reyes went on radio station dzMM to call Cayetano and a few other senators “hypocrites.”

The Senate minority leader said that pronouncements of Enrile and Reyes differed on the removal of Senate secretariat employees detailed to his office and the P250,000 “cash gift” to senators.

“So who between the two of them is running the Senate?” Cayetano said.

Following the break in the emotionally-charged session, Enrile apologized for the “fracas that happened.”  He also stood by Reyes saying that all her actions particularly her handwritten instructions on the MOOE were all done upon his instructions.

In defense of her man,  Reyes who’s barely heard from, took to the airwaves. On Monday, she gave a rare radio interview. She said that Enrile would not have distributed cash gifts amounting to P250,000 each if the senators never asked for Christmas doles.

“It’s illegal? Why does he accept such gifts every year?” Reyes told radio station dzMM when confronted by anchor Karen Davila about Cayetano’s allegation that it was illegal to distribute cash gifts from the Senate’s savings.

Reyes said Enrile wasn’t into giving cash gifts but senators teased him about such doles as Congress was about to take a Christmas break. She said Cayetano was one of those who had 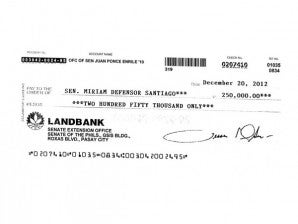 EMPOWERED A photocopy of a P250,000 check issued to Sen. Miriam Defensor-Santiago and signed by Jessica “Gigi” Reyes, the powerful chief of staff of the Senate President.

taken the lead in asking for such deals.

“This year, there were two senators, who we no longer named, who asked [for cash gifts]. The Senate President decided that all be given because there was enough savings from his office,” said Reyes, 50.

“You’ve seen how we have not been in good terms because of the sin tax and because of the RH (reproductive health) bill. I told him [Enrile] it was nothing personal. It’s just that we have a difference in opinion. I said Merry Christmas. He put his arm around my shoulder and he said ‘okay,’” Cayetano told reporters on Tuesday.

Cayetano said Enrile’s camp was actually skirting the issue of having to justify the P250,000 per senator that the Senate President gave in December.

In his own radio interview on Monday evening, Cayetano said Reyes made asking for a committee assignment look bad.

Cayetano said a senator without a committee chairmanship would not have anything to do. He maintained that savings should be returned to the national treasury. He added that the P250,000 he received had been “impounded” following its receipt in December by his office.

The Reyes interview hit  Cayetano hard that in his privilege speech he sort of formally introduced Gigi Reyes  to the country at large as the powerhouse that she is. With a report from Norman Bordadora