Nothing wrong with Aquino, Binay campaigning–Comelec 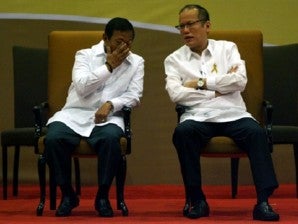 There’s nothing wrong with President Aquino or Vice President Jejomar Binay appearing in political ads endorsing, and raising the arms of, candidates for the May 13 elections.

As the country’s two highest officials, Mr. Aquino and Binay are actually exempted from the constitutional ban imposed on public servants against participating in campaigns or endorsing candidates, among other partisan political activities, the Commission on Elections said Wednesday. The exemption also extends to Cabinet secretaries.

It was earlier reported that the President was likely to appear in campaign advertisements of candidates of the ruling Liberal Party coalition.

Binay has already been seen appearing in several advertisements and provincial sojourns of the rival United Nationalist Alliance (UNA).

“The ban imposed by the Constitution on public servants is not absolute…there is an exemption. The President can campaign because his position is political. So such position is not covered by prohibition,” said commissioner Rene Sarmiento.

The clarification was made as the Comelec came out with a flurry of resolutions outlining the do’s and dont’s during the campaign period for the May 13 elections, as well as rules for political campaigning in the mass media and on cyberspace.

Sarmiento cited the constitutional provision which states that “no officer or employee in the civil service shall engage, directly or indirectly, in any electioneering or partisan political campaign.”

But he said jurisprudence, particularly the Supreme Court ruling on Santos v Yatco in the 1960s, has granted an exemption to several government officials, particular those occupying positions considered as “political.”

These positions include those of the President, Vice President, Cabinet secretaries and other elected national and local officials.

Cabinet secretaries are exempted because they are considered the “alter ego” of the President, said Sarmiento. But barangay officials are not covered by the exemption, he stressed.

In reality, however, it has become a common practice among national and local candidates to ask the endorsement of barangay officials to ensure their victory in the elections, Sarmiento said.

“The law says barangay officials must be nonpartisan. But in reality, that doesn’t happen so that is one thing that we will still have to talk about in the Comelec…what we can do about these barangay officials being used by candidates,” he said.