Coballes is new Army chief at ‘challenging and delicate’ time 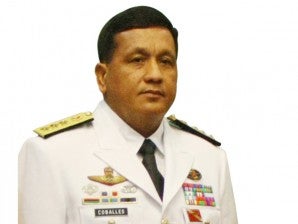 The event was graced by guest of honor President and Commander-in-Chief Benigno Aquino III at Fort Bonifacio.

No word has been said on who will replace Coballes as vice chief of staff.

A Mindanao veteran, Coballes will take charge of the military’s most dominant branch of service at 80,000-strong.

He is a member of the Philippine Military Academy Class of 1980.

Aquino reiterated in his speech that the upcoming elections would be “a challenge to the military” and at the same time he also hit early campaigners.

(While candidates intensify their early campaigning, it’s the prime duty of soldiers to make the citizens feel secure.)

Coballes, meanwhile, admitted that it is a “delicate time” to be an Army chief.

“I’d admit that it is a very delicate time to be CGPA. Especially now that midterm election is fast approaching,” he said.

“To be designated as CGPA is an honor, but it comes with a challenge,” Coballes added.