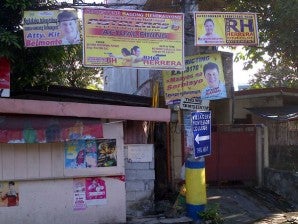 Hundreds of posters flaunting the faces and names of local government officials with various greetings in Quezon City have sprouted as the May 2013 midterm election draws nearer.

“We are issuing this call to all candidates: please remove all prohibited forms of election propaganda before the start of the campaign period,” Comelec chairman Sixto Brillantes Jr. said in a statement.

“Failure to comply constitutes an election offense punishable by one to six years imprisonment, disqualification to hold public office and deprivation of the right of suffrage,” Brillantes said.

All election propaganda should be removed before the campaign period officially starts on February 12, 2013 for national candidates and March 29, 2013 for local candidates, Comelec said.

Prohibited propaganda are described as those that “include any names, images, logos, brands, insignias, color motifs, initials, and other forms of identifiable graphical representations placed by incumbent officials on any public structures or places.”

The resolution also states that all election propaganda should only be placed in authorized common poster areas. Campaign materials are not allowed on public places or private properties, it said.

“Also prohibited are election propaganda posted in government vehicles, public utility vehicles such as buses, jeepneys, trains, taxi cabs, ferries, pedicabs, and tricycles … within the premises of public terminals such as bus terminals, airports, seaports, docks, piers, train stations and the like,” the resolution stated.

Many candidates have been criticized for their posters throughout the country that show their faces and names or initials. Dubbed as “epal,” many citizens have banded together for a shame campaign over the Internet against those government officials who publish such materials.