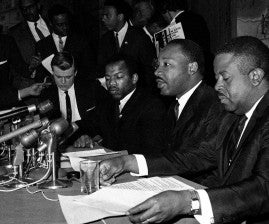 In this April 2, 1965 file photo, Dr. Martin Luther King Jr., second from right, speaks at a news conference next to John Lewis, to his left, chairman of the Student Nonviolent Coordinating Committee, in Baltimore. AP Photo/William A. Smith, File

Following a high-level luncheon in the wake of his swearing-in ceremony, Obama, the first African-American US president—paused briefly in front of a bust of King— who was slain in 1968— in the rotunda of the US Capitol.

Obama’s official inauguration fell on Martin Luther King, Jr. Day, a federal holiday that pays tribute to King, perhaps most widely remembered for his stirring 1963 “I Have a Dream” speech for racial equality.

Obama evoked King’s memory in his inaugural address on the steps of the Capitol as he pressed for equal rights for women and gays, and for immigration reform.

“It is now our generation’s task to carry on what those pioneers began,” he said.

Moments earlier, while taking the oath of office, Obama raised his right hand and rested his left on Bibles once owned by King and Abraham Lincoln, the 16th US president.

In another powerful symbol evoking civil rights, the invocation at the ceremony witnessed by hundreds of thousands was delivered by Myrlie Evers-Williams, widow of slain civil rights activist Medgar Evers.

In October 2011, King became the first African American to be honored with a monument along the National Mall in Washington.