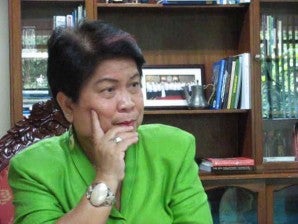 The Department of Social Welfare and Development (DSWD) has endorsed a bill that is pending in committee in the House of Representatives which would decriminalize prostitution but punish those who control and profit from the flesh trade.

The Anti-Prostitution Bill pending in the House committee on justice chaired by Iloilo Rep. Niel Tupas seeks to repeal the clauses under Articles 202 and 341 of the Revised Penal Code which punish “women who, for money, engage in sexual intercourse, or lascivious conduct.”

In a letter addressed to Tupas, Social Welfare Secretary Corazon “Dinky” Soliman said the bill was one of the agency’s priority pieces of legislation.

The DSWD, however, clarified that it did not support the legalization of prostitution in the country.

Soliman said the bill would provide social protection to the victims and ensure the prosecution of persons who control and profit from the trade by exploiting the victims’ poverty. The bill would also offer programs and services that would promote their economic well-being.

Under the bill, a National Anti-Prostitution Council headed by the DSWD will be created composed of various government agencies, nongovernment organizations and persons exploited in prostitution.

“We all know that most, if not all, prostituted persons are forced to engage in this activity because of compelling reasons such as poverty if they are not victims of human trafficking. The government will continue to provide programs and services to uplift their economic well-being,” Soliman said. Cynthia D. Balana