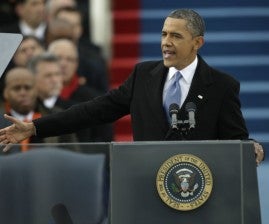 ANOTHER 4 YEARS President Barack Obama speaks at his ceremonial swearing-in at the US Capitol during the 57th Presidential Inauguration in Washington, Monday, Jan. 21, 2013. AP

WASHINGTON—President Barack Obama issued an impassioned call for national unity and equality on Monday, warning political “absolutism” must not thwart change and renewal, as he was inaugurated for a second term.

Obama was publicly sworn in for another four White House years before a crowd of hundreds of thousands on Washington’s National Mall, and delivered an inaugural address steeped in poetic power and broad hints of his new agenda.

The 44th president repeatedly used the “We the People” preamble to the US Constitution to suggest how to reconcile America’s founding truths and the current discord and dysfunction of its embittered political system.

“For now, decisions are upon us, and we cannot afford delay,” Obama said.

“We cannot mistake absolutism for principle, or substitute spectacle for politics, or treat name-calling as reasoned debate. We must act, knowing that our work will be imperfect,” Obama declared.

Obama’s speech was noticeably liberal — calling for protection for the weak, the poor and those lacking health care and obliquely including a call for gay rights and protection against gun crime for children.

“Our journey is not complete until our gay brothers and sisters are treated like anyone else under the law — for if we are truly created equal, then surely the love we commit to one another must be equal as well,” Obama said.

“Our journey is not complete until we find a better way to welcome the striving, hopeful immigrants who still see America as a land of opportunity.

“Our journey is not complete until all our children, from the streets of Detroit to the hills of Appalachia to the quiet lanes of Newtown, know that they are cared for, and cherished, and always safe from harm.”

The president also said that American security did not require “perpetual war” and promised to base American global leadership on dialogue, firm alliances but not to cede the threat of the use of force.

“We will defend our people and uphold our values through strength of arms and rule of law,” Obama said.

“We will show the courage to try and resolve our differences with other nations peacefully — not because we are naïve about the dangers we face, but because engagement can more durably lift suspicion and fear.”

And Obama also vowed the meet the threat of global warming, despite skepticism on climate change from some Republican foes, and political barriers to taking serious action.

Obama earlier raised his right hand and rested his left on Bibles once owned by Martin Luther King and Abraham Lincoln, on an outdoor platform set on the West Front of the US Capitol building and below its elegant white dome.

“I Barack Hussein Obama …” the 44th president said, vowing to faithfully execute his office and to “preserve, protect and defend the constitution,” led in the oath of office by black-robed Chief Justice John Roberts.

The president was earlier announced with a peal of trumpets and walked down the steps from the iconic building to a huge cheers of “Obama, Obama” from a vast crowd stretching into the distance down the National Mall below.

Obama, his smile beaming wide, appeared more relaxed than at his first inauguration four years ago, when he took office as an untested and inexperienced leader as an economic depression threatened.

The president, the first African American to hold the office, launched his second term with a private swearing-in ceremony on Sunday, before basking in the full pomp of his office with public celebrations Monday.

Bundled-up Obama supporters had trekked into town to join snaking lines for Secret Service checkpoints guarding a steel-fenced secure zone around the White House and the inaugural parade route.

Though the mood was festive, as revelers crammed into coffee shops and subway trains heading downtown, Obama’s second inauguration lacked the sense of historic promise and hope that greeted his first term in 2009.

Dignitaries, including former Democratic presidents Jimmy Carter and Bill Clinton, and Secretary of State Hillary Clinton, took their seats on a platform at the West Front of the Capitol.

One Obama supporter, the Reverend Ruddie Mingo, 54, donated time and money to the president’s winning campaign against Republican Mitt Romney, and said inaugural festivities were less mobbed than four years ago.

“My hope is that his next four years we can get more stuff accomplished on both sides,” he said.

Obama’s political brand has been damaged by an exhausting first term battling the worst economic storm in decades and brutal partisan warfare with his Republican rivals, notably over taxes and spending.

When he returns to politics, Obama, 51, has a legacy to defend, including a historic health care law and a retrenchment from draining wars abroad, and he is vowing to make good on the promise of a fairer economy.

Obama took the oath for a first time Sunday in a private ceremony at the White House because the constitution states that US presidential terms end at noon on January 20.

When that date falls on a Sunday, there is a private swearing-in ceremony before public celebrations and a second oath taking the next day.

In another historic echo, Obama was the second president to be sworn in four times — thanks to the Roberts stumble in 2009 and his double oath duty this year, joining Democratic icon Franklin Roosevelt.