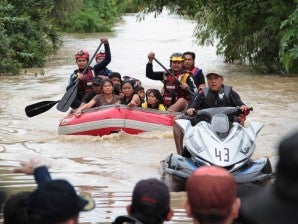 Thousands of villagers leave their homes following a severe flooding that hit several areas in Davao City on Sunday, Jan. 20, 2013. Rescuers continued the search for two people who were reported missing in the massive flooding that has temporarily displaced at least 40,000 people in Compostela Valley and Davao del Norte. DENNIS JAY SANTOS/INQUIRER MINDANAO

TAGUM CITY, Davao del Norte, Philippines—Rescuers continued the search for two people who were reported missing in the massive flooding that has temporarily displaced at least 40,000 people in two southern Mindanao provinces.

Water levels were already subsiding in upstream villages in Davao del Norte, but a portion of the highway in Carmen town was rendered impassable to most vehicles as the Libuganon River overflowed, with knee-deep floodwater creeping toward the national road in Guadalupe and Tuganay villages, Sonio Sanchez, Davao del Norte disaster officer, said.

Two persons were also reported missing after being carried away by rampaging flood waters in Asuncion town and in this city, said Sanchez.

Ramon Ampong, 63, was swept away as he attempted to cross the swollen Saug River in Sonlon village, Asuncion, past 3 p.m. on Sunday, while a 17-year-old boy fell off and was carried away by the flood after hitting a live wire in San Miguel village in this city, Sanchez told the Philippine Daily Inquirer by text message.

“They have yet to be found,” Sanchez said, contrary to earlier reports that Ampong’s body was already found Sunday afternoon.

In Compostela Valley, a one-year-old boy drowned after accidentally falling off from their house to their flooded yard in Compostela town late on Sunday, said Raul Villocino, provincial disaster officer.

A landslide also hit the mining village of Bukal, in Nabunturan town on Sunday, burying an abandoned bunkhouse and causing no casualties, Villocino said. He said most of the more than 200 families evacuated in the province have yet to return to their homes.

Gov. Rodolfo del Rosario late on Sunday ordered the suspension of classes from kindergarten to high school in all public and private schools in all affected areas in Davao del Norte.

Sanchez said some residents in upstream villages have headed for home as flood waters in these areas had started to subside, without giving figures.

“But we are still on alert due to a new weather system, as per Pagasa (Philippine Atmospheric, Geophysical and Astronomical Services Administration), an ITCZ (inter-tropical convergence zone),” added Sanchez.

In Davao City, the City Council declared 15 barangays (villages) affected by one of the worst flooding in the city’s history under a state of calamity, approving the release of P58 million in aid to over 12,655 families affected.

Already, most of the evacuees have returned to their homes, cleaning mud and debris. Some, however, opted to stay in various evacuation centers, fearing the flood would return due to the occasional rain.