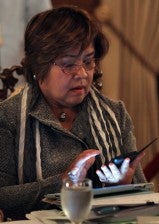 MANILA, Philippines — Standing by the National Bureau of Investigation (NBI) witnesses who claimed the Jan. 6 encounter in Atimonan, Quezon was not a shootout, Justice Secretary Leila De Lima asked the 25 Army soldiers and police operatives who took part there to “speak the truth” and promised the government would protect them should they do so.

De Lima said they were giving these men “a chance to cooperate and possibly be considered state witnesses.”

“We’re hoping that anyone or several of those involved, especially those coming from the ranks of the enlisted men, will genuinely cooperate and speak out the truth,” De Lima said in text messages to reporters.

“If that happens, government assures him or them, as the case maybe, of their safety and proper treatment,” she added.

The justice secretary said she was directing her appeal to the “enlisted men or the lower-ranked operatives involved in the operations.”

Lawyers for the Army special forces had said last week they would present a witness who would dispute the claim of two NBI witnesses that the encounter between government security forces and 13 slain members of an alleged criminal group was not a shootout.

The lawyers of the soldiers as well as police operatives involved in the fatal shooting earlier slammed De Lima for preempting the NBI investigation by declaring that no shootout happened..

The justice secretary made the statement after she supervised a re-enactment of the encounter last week with the help of two witnesses who came forward to the NBI. The two witnesses said they saw everything that happened as they were in a truck that was overtaken by two vehicles of Vic Siman –one of the 13 who were killed by government forces –when the joint police and military forces stopped them.

On Sunday, De Lima echoed statements made by NBI officials on Saturday that the military witness’ claims would “not affect the direction that the NBI is now taking in concluding its report, at least on the aspect of what happened at the incident site on Jan. 6 and the culpability of those involved.”

“We stand by the eyewitnesses’ account which we find credible and supported by other evidence (physical, forensic, etc),” she said.

De Lima said the claim of the police operatives and soldiers that the encounter was a shootout was an admission that “they killed the victims” and they were just “invoking self-defense as a justifying circumstance” in asserting that Siman’s group fired at them first.

“But having deemed to have admitted killing the victims, the burden of proof is shifted on them to show that unlawful aggression came from Siman, et al. And that’s the function of their defense either in the course of preliminary investigation/trial,” she said, noting though that “for now” the findings of the NBI “thus far negate or debunk such claim of a shootout.”

Asked whether she thought that there was a conspiracy between police and military operatives involved in the shooting to make it appear the encounter was a shootout, De Lima said it was “still premature to think so.”

The justice secretary, meanwhile, said the NBI would try to meet the deadline in submitting its report to President Aquino, before the Chief Executive’s flight to Davos, Switzerland on Wednesday night.

President Aquino has picked the NBI as the sole investigative body on the Atimonan, Quezon shooting, to avoid any conflicting findings surfacing in the media.

So far, the PNP has submitted its own report to the President, with the police fact-finding body, declaring there was no shootout and there was use of excessive force on the victims, 11 of whom were shot in the head.