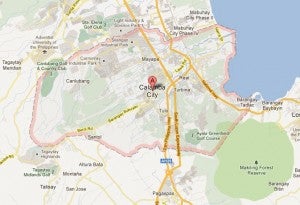 CALAMBA CITY, Laguna, Philippines — The initial findings in the investigation of the gun-slaying of 13 people in Atimonan, Quezon province, on Jan. 6, have bolstered the suspicions of some residents here that a similar event that happened here two months ago was also a police rubout.

Residents living near the site of the supposed clash between policemen and six alleged guns-for-hire noticed similarities between the Atimonan killings and the supposed “shootout” in Barangay (village) Lecheria here on Nov. 6, 2012.

Interestingly, both police operations were led by Superintendent Hansel Marantan, who was sacked as deputy intelligence chief of the Calabarzon (Cavite, Laguna, Batangas, Rizal and Quezon) police following the Atimonan fatal shooting.

Among those killed in the Calamba encounter was Nestor “JR” Banog Jr., who was identified by Philippine Daily Inquirer sources in the Philippine National Police (PNP) as a trusted lieutenant of Victor “Vic” Siman, the alleged operator of the illegal numbers game “jueteng” who was killed in the Quezon shooting.

Like what happened to the 13 people killed in Quezon, the six men who were slain in Calamba were stopped at a police checkpoint manned by policemen under Marantan’s supervision.

“Hearing how the ‘shootout’ took place in Quezon really gave me goose bumps because it was very similar to what had happened here,” said a woman, who asked not be named for security reasons.

The woman, who said she was just 30 meters away from the site of the shooting, said that both encounters in Calamba and Quezon occurred at checkpoints set up away from populated areas, an apparent violation of PNP protocol on conducting checkpoint operations.

Another resident, a man in his 30s, said he did not hear an exchange of gun fire, contrary to what then Laguna police director, Senior Supt. Fausto Manzanilla, claimed.

Instead, the residents said the gunshots sounded as if it was coming from only one direction.

“Anyone can tell how an exchange of gun fire would have sounded. What we heard during that morning was just coming from one direction,” the man said, adding that the gun shots only lasted “less than two minutes.”

The residents also contradicted the previous report of the local police that a car chase ensued when the vehicle that Banog and his companions were riding in refused to stop at the checkpoint.

“If a car chase really happened, then we would have heard tires screeching. The vehicle of the supposed criminals would have also hit the police signage,” the man said.

The woman said it was not the first time that a fire fight between the police and suspected criminals occurred in the area, an uphill concrete road connecting the city proper of Calamba and the main national highway.

Like what happened in Quezon, the residents said the policemen who shot Banog and his group were not in uniform, another violation of the PNP policy.

They said the policemen in civilian clothes also instructed them to “hide and stay inside their house” before and after the shooting.