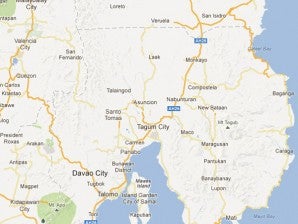 At least 178 families have left their homes in Compostela Valley, with authorities forcing some residents to evacuation centers as water levels in major rivers there continue to rise and threatem low-lying communities, according to Raul Villocino, provincial disaster officer.

Gov. Arturo Uy, according to Villocino, on Saturday afternoon ordered the pre-emptive evacuation as heavy rains lashed the province for several days already.

Those evacuated included 129 families in the villages of Andap, Cogonon and Cabinuangan, in New Bataan, the town which suffered the most number of casualties in last December’s killer storm.

“Early this morning we also implemented forced evacuation in Poblacion, Compostela town, as there were still stubborn residents who refused to heed the pre-emptive evacuation yesterday,” Villocino told the Inquirer over the phone.

At least 37 families also headed to the evacuation centers in Basak and Magsaysay villages in Nabunturan, while 12 families from Sitio (Sub-village) Pag-ibig, in the mining village of Mt. Diwalwal in Monkayo town are sheltered at the village hall due to fear of a landslide.

Meanwhile, Waist-deep floodwater has submerged most of Maniki village, the center of Kapalong town, forcing many residents to flee to safer grounds, Mayor Edgardo Timbol said.

“This (flooding) is more severe compared to the previous one,” Timbol told the Inquirer in a text message, referring to the flooding early this month that killed a 17-year old boy and also displaced hundreds in his town.

He said provincial disaster teams are also monitoring as floodwater continues to rise, with flooding even reported at Palma Gil village, of the upland municipality of Talaingod.

In Tagum City, the Pagsabangan River also burst its banks, flooding the national highway that links the city to Asuncion. But the bridge was still passable as of 11 a.m., according to Albert Angco, city disaster officer.

Angco said forced evacuation of residents have also been carried out starting early Sunday, specifically in the villages of Pagsabangan and Cuambogan.

He said the national road connecting Asuncion, Kapalong and San Isidro has been flooded, virtually cutting off traffic to and from these towns.