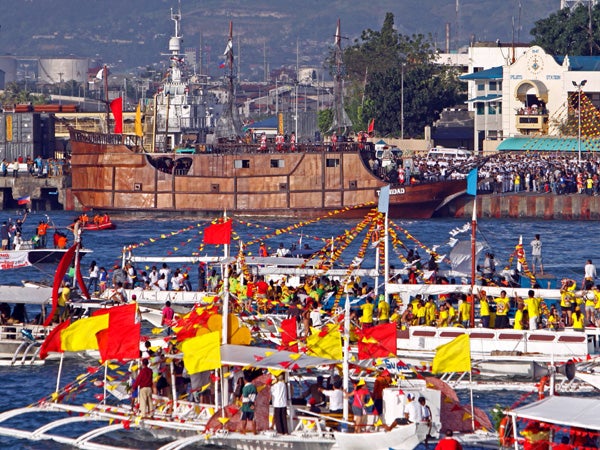 SINULOG 2013 FLUVIAL PROCESSION. The Galleon Trinidad dock at Pier 1 to embark the image of the Sto. Niño after the fluvial procession from Ouano warf during the Sinulog 2013 fluvial procession on Saturday. LITO TECSON/Cebu Daily News

CEBU CITY—More than 100 boats joined the Sto. Niño fluvial procession that started after 6 a.m. on Saturday as hundreds of devotees lined the port area from Ouano Wharf in Mandaue City to the Cebu City port.

At Ouano Wharf, devotees released multicolored balloons to greet the Galleon Trinidad, which carried the images of the Sto. Niño and Our Lady of Guadalupe, led by Cebu Archbishop Jose Palma.

About 100 devotees, many of them carrying their own Sto. Niño images, were on board the Philippine Navy ship BRP Emilio Aguinaldo.

The procession boats were festooned with colorful banners and other decorations. There were men dressed in Spanish armada costumes.

The  devotees on the ground waved red and yellow banners, raised images of the child Jesus or Sto Niño, and shouted “Viva! Pit Senyor!” as the galleon passed by.

The drum and bugle corps on the boat resounded with the Sinulog beat as passengers danced holding their Sto. Niño images high. Songs about the Sto. Nino were also played.

In Lapu-Lapu City, crowds gathered on Muelle Osmeña, Mactan Island, and crowded the Mandaue-Mactan bridge to watch the fluvial parade.

Lapu-Lapu devotees set off firecrackers, waved their hands in unison and sang, while the big boats sounded  their horns in salute.

Some devotees on jet skis followed the main galleon. A small plane dropped yellow rose petals on the procession.

The procession arrived at Cebu port’s Pier One at 7:25 a.m., earlier than usual. The Church officials had decided to cut the route by 0.5 nautical miles, bypassing the Pasil fish port in Cebu City.

A 9 a.m. Mass at the Basilica del Sto. Niño reenacted the first baptism of the rulers and residents of Cebu with the coming of the Spanish explorers.

There were no untoward incidents reported. But the Coast Guard commander in Cebu, Rolando Punzalan, said they would issue violation citations to vehicles that participated in the procession but did not register with them.

Many devotees attribute miraculous powers to the image of the Sto. Nino.

Ramona Fernandez, 57, of Barangay Tingub in Mandaue City, said she endured the 40-minute foot procession from the National Shrine of St. Joseph to the Ouano Wharf in Mandaue City as a way of thanking the Sto. Niño for helping her survive a heart attack in 2012.

Holding a one-foot image of the miraculous child, Fernandez said that since recovering from her attack, she had pledged (panata) to always attend the sendoff of the Sto. Niño and Our Lady of Guadalupe.

“This is my thanksgiving for the additional years given to me,” said Fernandez, who was up at 4 a.m. to attend the sendoff Mass at the National Shrine of St. Joseph together with her 12-year-old grandson.