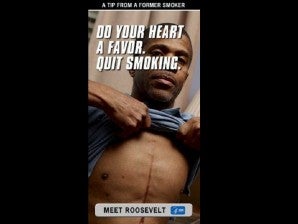 This image courtesy of the US Department of Health and Human Services center for Disease Control and Prevention shows a clip of an anti smoking advertisement. Roosevelt never thought that at 45-years-old he would have a heart attack due to his smoking. In this TV ad, from CDC’s Tips From Former Smokers campaign, he talks about the impact his smoking-related heart attack has had on his life. These anti tobacco print ads and video testimonies by the CDC are a campaign to inspire smokers to quit smoking. AFP PHOTO

Health advocates are pushing anew for graphic health warnings (GHWs) on cigarette packs, citing a new Harvard study which showed that pictures are more powerful than words in warning people, especially minority groups, about the dangers of smoking.

Nongovernmental organization HealthJustice said the study conducted by the Harvard School of Public Health and international tobacco control group Legacy found that GHWs were more effective in getting smokers of diverse racial and ethnic backgrounds to quit smoking.

The study observed reactions of 3,300 smokers to various warning labels on cigarette packs. It revealed how the powerful graphics made an impact across all demographic groups based on race, ethnicity, income and education.

This prompted HealthJustice to renew calls for lawmakers to pass a law mandating the printing of graphic health warnings on cigarette packs.

“We hope our lawmakers can pass this bill before Congress adjourns so that many lives will benefit from it,” said lawyer Irene Reyes, managing director of HealthJustice.

At least 6 million people die every year from tobacco-related diseases worldwide. Eighty percent of those deaths come from developing countries like the Philippines, where there is a lack of health awareness and fewer resources available for educating the public about tobacco’s dangerous effects.

In the Philippines, 240 Filipinos die every day due to tobacco-related causes.

“Filipinos have a high literacy but so many of us are not health literate,” said Emer Rojas, a laryngeal cancer survivor and president of the New Vois Association of the Philippines.

“Too many of our countrymen begin smoking without knowing what they’re really getting into. I should know—I smoked until my cancer forced me to stop,” he said.