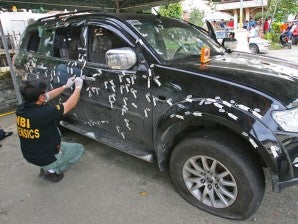 MANILA, Philippines–Whatever the military’s witness says, it will not affect the National Bureau of Investigation’s finding that the killings of 13 people in Atimonan, Quezon province, on January 6 were not the results of a shootout between government security forces and alleged criminals, an NBI official said Saturday.

Crisanto Buela, a lawyer for the Army soldiers, who, along with police officers from Southern Luzon, are facing investigation for the killings, told reporters Friday that the military has a witness who will prove that what happened was a shootout.

But Vicente de Guzman, NBI deputy director for Metro Manila, said Saturday that whatever the military’s witness says will not change the NBI’s finding that whatever it was that happened in Atimonan, it was not a shootout.

De Guzman said the government’s two witnesses who described to NBI investigators the events of Jan. 6 were “very credible and their statements were corroborated” by other evidence.

“The witnesses came forward, were credible, and had no reason to lie,” De Guzman said.

He added that the reenactment on Thursday of the supposed gun battle in Atimonan validated the witnesses’ statements and recollection of the event.

“These people fear for their lives, anyone who witnessed [the] carnage will never forget it,” De Guzman said.

The Department of Justice has placed the two men on the government’s witness protection program.

De Guzman said the investigators were just waiting for the completion of the results of ballistic tests on the firearms submitted by the soldiers and policemen involved in the killings of the 13 alleged criminals, including Victor “Vic” Siman, alleged operator of the numbers racket “jueteng” in provinces south of Manila.

After the ballistic tests, the NBI should be ready to submit a report to President Aquino, who had ordered the bureau to find out what really happened in Atimonan because of accusations from the relatives of those killed that the victims had been summarily executed.

Malacañang on Saturday said the President expected to receive the report by Wednesday.

Valte said the Philippine National Police submitted its own report to the President earlier this week, but the NBI was the agency that had been directed to investigate and determine what really happened in Atimonan.

On Thursday, after a reenactment of the events of Jan. 6, Justice Secretary Leila de Lima said that what happened was “definitely not a shootout.”

Valte said the NBI report would guide the government in deciding what really happened in Atimonan and who would be held accountable. (With a report from Michael Lim Ubac)

Read Next
No stopping Manila Bay reclamation
EDITORS' PICK
18,529 out of 24,903 pass nursing board exam
House energy committee chair Arroyo bats for cheap electricity
PH ramping up talks on nuclear power deals
6 fallen activists to be honored at Bantayog
The vivo Y16 makes the season of giving more thoughtful for the whole family
The Best Tech Gifts For The 2022 Holidays
MOST READ
LOOK: Vina Morales goes to Boracay with mystery man
Ref admits he cheated to help Manny Pacquiao win
Mel Tiangco on co-anchor Mike Enriquez’s condition, ‘rivalry’ with Korina Sanchez
Application of tiebreak takes loser in and leaves winner out of title series as Creamline makes heartbreaking exit
Don't miss out on the latest news and information.