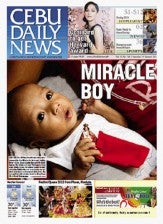 “I am ready to face all risks even if they will embrass me or throw anything to me. I would be ready to take that. I’m ready to sacrifice even to the point of being a recipient of pain and embarrassment,” she told reporters yesterday.

“My devotion to the Sto. Niño should take precedence over everything.”

In her office, the vestments of the Sto. Niño icon which she uses in dancing the Sinulog in previous years has been changed, although she said this was an annual ritual.

There were initial reports that two choreographers were seen rehearsing dance steps with Garcia in her Capitol office where she’s been holded up since Dec. 19.

Her refusal to vacate the office is her way of protesting her six-month suspension by the Office of the President which found her guilty of “grave abuse of authority” in usurping the appointment powers of the late vice governor Gregorio Sanchez Jr., a sanction she dismissed as “illegal” and a “power grab” by the Liberal Party.

Garcia has kept the public guessing about her expressed desire to perform her “last dance” in the Sinulog.

If she does step out for the public appearance in the Cebu City Sports Center, it would be the first time she’s been that far away from her east wing office in 33 days.

Acting Gov. Agnes Magpale earlier said it was fine with her if Garcia would “dance gracefully out” of her office and even assured that Garcia was free to return.

Garcia earlier said she didn’t trust Magpale’s assurance but appeared to have changed her mind after weighing the benefits of demonstrating her devotion to the Sto. Niño in Cebu’s biggest festival watched by a potential audience of millions as the dance presentations at the sports stadium are covered live by TV stations and livestreamed on Internet channels.

“I have been with you (Cebuanos) for the past eight years . I have made that commitment that I would dance in grateful appreciation and offering that would demonstrate my devotion and my love for the Sto. Niño. This Sunday, with all my heart, I will wish and hope to once again dance for the ninth and last time as governor of the province of Cebu. Let us look forward with much hope and anticipation,” she said yesterday.

The governor’s choice of costume, usually a gown done by a high-fashion designer, and her annual appearance at the Sinulog parade is the subject of much media attention.

Earlier, Garcia said she may have to resue one of her previous Sinulog gowns.

Not many know, that some of her Sinulog gowns are on display on mannequeins at the Governor’s Gallery in the Capitol building

Elizabeth Francia, her chief of staff, said the gowns were highlights of Garcia’s three terms as governor.

“The highlights of her terms have always been her participation in the Sinulog. That’s why we decided to feature the gowns there and also to add color to the gallery,” she added.

The gallery, which has other memorabilia, is usually kept locked and opened only for special occasions. Cebu Daily News had the chance to tour the gallery where three out of her eight gowns were on display as the centerpiece of all the exhibits.

The gowns were creations of two of Cebu’s top designers, Philip Rodriguez and Cary Santiago.

Rodriguez’s creation, a bejeweled, turquoise serpentina-cut gown was worn by Garcia in 2009 when she led dancers of the Tostado Festival contingent of Santander town. It was exhibited with a crown designed by Mark Tenchavez.

Also on display are Santiago’s two creations, her Haladaya Queen gown, which Garcia wore in 2006, and the Goddess of the Sea gown which she used during her second Sinulog performance.

Santiago, who has been doing Garcia’s gown for five years, said some of the gowns were “gifts” from businesswoman -philanthropist Mariquita Salimbangon-Yeung and from himself.

The five other gowns are kept by the governor at home.

The gallery was formerly the office of the Provincial Secretary which was later used by the tourism staff.

In 2009, Garcia had it renovated as a gallery for memorabilia of past governors such as photographs and clothes they’ve worn, such as Gov. Jose Briones’ barong Tagalog.

The Governor’s Gallery was put up with the help of heritage consultant Jojo Bersales, along with architect Tess Javier, Ian Fresnido and department head Evangeline de Paula.