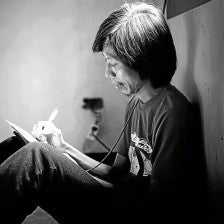 Ericson Acosta in his prison cell in Samar. He’s finally granted freedom although temporary, a medical furlough due to his nephritis. DENNIS LONGID

MANILA, Philippines—A poet-activist detained for more than a year in Samar for possession of explosives was temporarily freed by the court to undergo medical treatment at the National Kidney Center in Manila.

The regional trial court (RTC) in Gandara, Samar finally granted a motion for a medical checkup filed by lawyers of former University of the Philippines student Ericson Acosta in July 2012, after the detainee displayed symptoms of serious renal problems.

It took a visit by Public Attorney’s Office (PAO) chief Persida Rueda-Acosta (no relation to the detainee), who arrived at the Calbayog sub-provincial jail with a medico-legal consultant and a paralegal team from human rights organization Karapatan, to get authorities to act on Acosta’s plea for medical assistance.

The detainee, a former editor of the UP student organ Collegian, arrived at Ninoy Aquino International Airport Terminal 3 on Friday morning amid cheers from his supporters, friends and family, including his 80-year-old mother Liwayway.

The PAO chief had flown to Calbayog upon the request of Acosta’s family and the Free Ericson Acosta Campaign (FEAC).

It was found that Acosta has been suffering from nephritis, a condition characterized by blood in the urine (hematuria), lower back pains, high fever and painful urination (dysuria). These findings prompted the RTC to immediately grant Acosta’s motion for check-up, and allowed the PAO chief to accompany him right away to the National Kidney Institute in Quezon City.

Acosta, 40, was arrested by the military in San Jorge, Samar on suspicion of membership in the rebel New People’s Army. He was charged with illegal possession of explosives.

Acosta claimed he was doing volunteer research work for a local peasant group.

He has been detained at the Calbayog Sub-Provincial Jail for 23 months.

FEAC convenor Renato Reyes Jr. welcomed Acosta’s medical furlough, saying that it was long overdue yet something that could have been avoided.

“Ericson’s aggravated medical condition is a result of his incarceration and torture in the hands of a government that criminalizes political opposition and what it arbitrarily tags as ‘enemies of the state,’” Reyes said.