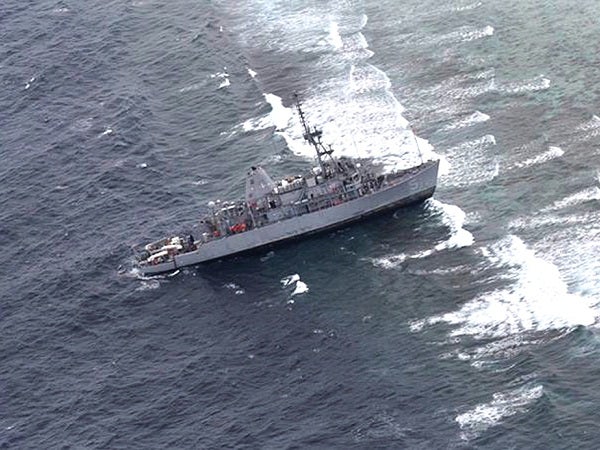 INTRUDER The USS Guardian, a US Navy minesweeper, is still stuck after running aground Tubbataha Reefs, a Unesco World Heritage Site in Sulu Sea, in this Jan. 17 photo released by the Armed Forces of the Philippines Western Command. AP

The US Navy minesweeper that ran aground on a coral reef remained stuck at the Tubbataha Reefs Natural Park for the second day on Friday but most of the US sailors had left the ship for safety reasons after initial efforts to free the vessel failed, the US Navy’s 7th Fleet said in a statement on Friday.

It said 72 of the 79 crew of the USS Guardian were transferred to a military support vessel by small boat. A small team, including the commanding and executive officers, would remain on board to try to extricate the ship with as little damage to environment as possible, the statement said.

How the US warship managed to enter the marine sanctuary puzzles the Philippine Navy.

Commodore Joseph Peña of the Naval Forces West said there are designated sea-lanes where ships could sail, which was outside and “far” from the Tubbataha Reef.

“We’re asking the same question, too. How did the US ship get in there?” Peña said.

The US Navy also said that initial efforts to free the Guardian during high tide were not successful. Philippine officials said the weather yesterday was choppy with strong winds and rough seas.

The ship ran aground Thursday while in transit through the marine park, a coral sanctuary in the Sulu Sea, 640 kilometers southwest of Manila. There were no injuries or oil leaks, and Philippine authorities were trying to evaluate damage to the protected coral reef, designated by Unesco as a World Heritage Site in 1992.

The USS Guardian, a 68-meter long minesweeper, reportedly hit the upper side of the South Atoll, one of the two main atolls comprising the Tubbataha Reefs, at dawn of Thursday.

The World Wide Fund for Nature Philippines (WWF) said that according to an initial visual inspection, the 68-meter-long, 1,300-ton Guardian damaged at least 10 meters of the reef. Aerial photographs provided by the Philippine military showed the ship’s bow sitting atop corals in shallow turquoise waters. The stern was floating in the deep blue waters.

The US Navy said the cause of the grounding, which took place around 2 a.m. Thursday, was under investigation.

The US 7th Fleet claimed it had formally notified the Philippine government of the accident but has apparently bypassed the small detachment of park rangers guarding the marine park.

“They (US authorities) have not communicated with us so far,” said Angelique Songco, head of the government’s Protected Area Management Board that supervises the marine park.

Songco said the marine park’s management would file a formal protest with the US government over the behavior of the Guardian’s commander who prevented park rangers from approaching the vessel.

She said that park rangers were not allowed to board the ship for inspection and were told to contact the US Embassy in Manila. Their radio calls to the ship were ignored, she said.

“The ship’s commander ordered a general alert and deployed personnel into battle position when our rangers tried to approach their ship to assess the situation, forcing them to back off,” she said in a phone interview.

“They were well inside the marine park, stuck in the North Atoll of Tubbataha, and we were being prevented from coming close,” she said.

She said it was unclear how much of the reef was damaged. She said the government imposes a fine of about $300 per square meter (yard) of damaged coral.

In 2005, the environmental group Greenpeace was fined almost $7,000 after its flagship struck a reef in the same area.

Songco said they could not yet estimate the extent of the coral damage done by the US vessel but expressed concern that the area that got hit was abundant with marine life.

“We don’t know yet how much damage has been done. We can only wait till they leave before we take a look at the area,” she said.

The Philippine Navy has deployed a ship to the area to “provide assistance” to the stricken vessel but it said it would be mainly the US Navy that would pull the Guardian out of the reef.

“It will need a special ship to pull it out,” said Peña.

A second US vessel, identified by park authorities as the USS Champion, arrived early Friday, apparently to help get the USS Guardian off the reef.

“We don’t want to speculate what it’s going to do there … It was probably commissioned by the US,” Banaria said.

“Our (Navy) would be on standby because these are still our territorial waters and we would be providing information to our higher headquarters. We would be there for monitoring and to provide any help or assistance if they (US) ask for it,” he said.

US Navy ships have stepped up visits to Philippine ports for refueling, rest and recreation, plus joint military exercises as a result of a redeployment of US forces in the Asia-Pacific region.

The Philippines, a US defense treaty ally, has been entangled in a territorial dispute with China in the West Philippine Sea (South China Sea).

Raul Hernandez, spokesperson of the Department of Foreign Affairs, said in a statement: “Relevant agencies of the Philippine government will conduct their own investigation, assess the impact of the incident on the reef, and recommend any and all actions that must be taken.”

He said Gen. Edilberto Adan, executive director of the commission on the Visiting Forces Agreement (VFA) was “in touch with the Tubbataha Management Office as well as the US Embassy.”

“We do not want to rely on the information [of the US Embassy) alone, we would need to conduct our own research and our investigation to find out what really happened. [Philippine officials] will determine the legal violation connected with the incident,” he said.

Malacañang on Friday confirmed that the US minesweeper had come from Subic Bay for a “regular port call,” but declined to be drawn into a discussion this early on the subject of seeking damages from Washington.

“We don’t want to make any speculations yet at this point. We want to proceed where everything has been thoroughly established before we make any further comment on this matter,” said deputy presidential spokesperson Abigail Valte.

Valte stressed that the government was concerned about the possible damage to the reef by the US ship.

“But for now our concern is to make sure that there is very minimal damage. The Department of Foreign Affairs, Department of National Defense and other agencies are coordinating with the US embassy here in Manila just to make sure that it (ship) is extracted the soonest possible time … to avoid further injury to one of our national treasures,” she said.

She also tried to discourage the media from treating the incident as an offshoot of the increased US presence in the country following the new US “pivot policy” to the Asian region.

“Perhaps at this point (it is) not healthy to speculate,” she said.

“The ship was en route from Subic for a regular port call. We imagine that the other agencies will be launching their own investigation on how and why the ship ended up running aground,” she said.

Peña said the Navy had patrolled the area of the Tubbataha Reef last week to make sure that no ship would be crossing the waters of the marine sanctuary.

But just as the Philippine ship returned to shore to replenish its supplies, the USS Guardian had struck the coral reef.

Sen. Francis Pangilinan, a member of President Aquino’s Liberal Party, called on the DFA to demand a satisfactory explanation from the US government over the reported incursions into Philippine territory of US military forces over the past couple of weeks.

“First, it was a US drone. Now, it’s a minesweeper,” Pangilinan said in a statement.

“Friends and allies must exercise good faith by coming clean,” he added.

Pangilinan finds the US government “sketchy in providing answers in both incidents.”

Sen. Loren Legarda, chair of the Senate committee on foreign relations, expressed “extreme concern” over the damage to the Tubbataha Reef.

She said those who caused the incident should be made accountable. With reports from Nikko Dizon, Michael Lim Ubac, Norman Bordadora and AP