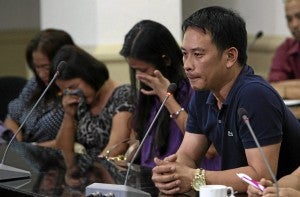 Atimonan Shoot-out- Brother of alleged gambling lord Victorino Siman among with the families of the 13 individuals killed at Atimonan, Quezon cries as they plead thier case to the NBI, claiming thier relatives were civilians and not members of a gun for hire syndicate, at the NBI office in Manila, Wednesday.INQUIRER FILE PHOTO

CALAMBA CITY, Philippines—The family of Victor “Vic” Siman, who appeared to be the primary target of a police operation in Atimonan, Quezon, welcomed on Friday the initial findings of a government investigation showing that the incident was not a shootout.

“We are thankful to the President, to (Justice) Secretary de Lima, to the DILG (Department of the Interior and Local Government) for the investigation that proved [it was not a shootout]. We hope this continues,” Siman’s younger brother, Christopher Siman, 37, said in a phone interview.

Christopher Siman–or “Boyet” as he is known in Barangay Maunong–is also the village captain.

Marantan, ground commander of the Atimonan operation, said the shots that hit him in the hand and knees were fired by Siman’s group.

In an interview on Tuesday, Marantan said he fell to the ground and the soldiers and policemen at the checkpoint returned fire.

The National Bureau of Investigation reenacted the incident in Atimonan on Thursday, following the accounts of two witnesses.

The investigators found that security forces shot environmentalist Tirso Lontok Jr. and another man from Siman’s group even after they had gotten off their vehicle with their hands raised.

“My brother had a big heart. He didn’t deserve to die that way,” Christopher Siman said.

Victor Siman, 40, was identified in “Coplan Armado,” the plan for the police operation against him, as the leader of an illegal gambling and gunrunning syndicate in Southern Tagalog, information that sources in the underground gambling business confirmed.

Christopher Siman declined to comment on the matter but their sister, Maria Teresa, insisted in an earlier interview that Siman’s businesses were legal. The community in the upland village of Maunong, where most residents are also their relatives, described him as a good and generous man.

“Whenever people came for help, I would refer them to Kuya Vic because I didn’t have that much,” Christopher Siman said.

Christopher Siman said his brother had a meeting on January 4 in his home. Present in that meeting were Paul Arcedillo Quiohilag, the real estate broker and insurance agent who was also killed in Atimonan, and several other people, whom he did not name.

“Supt. Alfredo Consemino and Lontok, on the other hand, were talking to Kuya Vic over the phone during the meeting,” Christopher Siman said.

The meeting was about closing a deal with Ayala Greenfield for security in the company’s project in Alabang for Siman’s security agency.

“They were even happy because it was a (new) project for them,” Christopher Siman said.

He said he and his brother last talked over the phone in the afternoon of January 5. “I was in Malvar (Batangas) for a derby (cockfight). I told him that our cock lost,” he said.

“I didn’t know they were leaving [for Bicol] that night. I only learned about it when I went to his home on Sunday morning,” he said, adding that he was told that Siman and his group left Calamba City, Laguna, sometime between 12 midnight and 1 a.m.