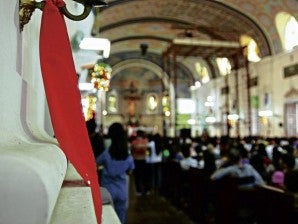 MANILA, Philippines–A Catholic Church official on Friday defended its continued opposition to the reproductive health law, adding that the Church only wanted the public to be aware of its potential “dangers.”

Fr. Melvin Castro, executive secretary of the Catholic Bishops’ Conference of the Philippines-Episcopal Commission on Family and Life, said the Church would continue to oppose the law until it is repealed.

“Let it not be said we did not warn our people. Though it may fall on deaf ears, we shall continue to proclaim the Gospel Life, knowing and firmly believing that in the end history would vindicate the Church position,” Castro said.

“Let it not be said that the Church remained silent and indifferent in this crossroads of our history… No human law can supplant natural and divine law,” he added.

Castro said the pro-life movement marked January 17, the start of the effectivity of the law, with “prayer and sorrow.”

“(January 17) signals the initial step of our nation following the footsteps of other countries that have officially embraced the contraceptive culture but now find themselves regretting having taken that step,” he said.

Castro said the RH law was just the “beginning of a tsunami of anti-family, anti-life legislation” like divorce, abortion and euthanasia or mercy killing.

“As we beg the Lord for forgiveness, we make our resolve to further the cause of defending life and family,” he added.

Speaking in apocalyptic terms, Lipa Archbishop Ramon Arguelles said the implementation of the RH law marked the “start of the genocide of our own people by our government.”

“The future of our race is disastrously sealed. The leaders have declared themselves against God. They have delivered their souls to the devil,” Arguelles said.

“God help us. This pueblo amante de Maria (people in love with the Virgin Mary) is no more,” he added.

Arguelles also scored other Church leaders for their “deafening silence” about the dangers of the controversial RH law.

“Even most leaders of churches have contributed to the great dragon’s temporary triumph by their deafening silence,” Arguelles said.

“I hope (martyred democracy hero Sen. Benigno) Ninoy (Aquino Jr.) and (his wife, the late President Corazon) Cory (Aquino) will pray to God and to Mary to save our country if there is still time,” he added.