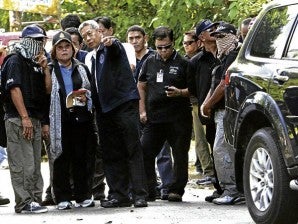 And if the police officer would insist on his story that an exchange of gunfire erupted between lawmen and criminals, De Lima said, “we don’t need it anymore because we already have our own findings from the account of our witnesses.”

“We were trying to get a statement from him (Marantan), but whether or not he will say anything material or significant, it will no longer have bearing for us, especially if they will stick to their lying, to their original statement that it was a shootout,” De Lima said.

De Lima spoke to journalists Thursday as National Bureau of Investigation probers conducted a reenactment of the shooting incident along Maharlika Highway in Barangay Lumutan here. President Aquino had earlier directed the NBI, which is under the Department of Justice (DOJ), to investigate the shooting.

Following warnings that he could face charges for obstruction of justice, Marantan is now ready to talk to NBI investigators, Philippine National Police spokesperson Generoso Cerbo Jr. said in a news briefing at Camp Crame in Quezon City Thursday.

The police officer also turned over to the agency the slug taken from his body and other pieces of evidence, Cerbo said.

Marantan, who was relieved from his post as deputy intelligence head of the Calabarzon regional police, led the ground operation against Victor “Vic” Siman, an alleged head of an illegal gambling and gun-for-hire syndicate, following an informant’s tip that the group would be passing through the highway in Atimonan.

Siman, three police officers and three military men were among those killed by Marantan’s group, which was backed up by members of the Army’s Special Forces. Marantan insisted that a shootout happened, resulting in 13 deaths, and that he himself was wounded in the limbs.

“From what we have gathered, (Marantan) is now cooperating with the NBI.” he said. Pressed to elaborate, he said: “Let’s just leave it at that. He’s already cooperating. The issue of whether he failed to cooperate or not is now water under the bridge.”

“We don’t want to give out a statement that may hamper or run in conflict with what the NBI will have to say,” Cerbo said.

De Lima said she expected the NBI to complete its investigation early next week.

“They are working overtime. Their scope of investigation is much broader. They are now digging into the actual operation. What was that all about? Its real objective? Who are the victims? Where did they come from and where they were going? Who gave the tip?” she said.

She added: “We really have to establish the motive. What was really the operation? Was it initially envisioned to be a legitimate operation and yet somewhere along the way, for some reason, personal or otherwise, to a particular personality involved in the operation, it went wrong. The whole thing went wrong.”

Sources in the underground gambling world had earlier said that Marantan had a sister named Cenen “Tita” Dinglasan, who was allegedly an operator of Siman’s rival gambling syndicate in Southern Tagalog. This fueled reports that the Atimonan encounter was a result of a gambling turf war.

In an Philippine Daily Inquirer interview on Tuesday, Marantan denied his and his family’s involvement in illegal gambling.

He said Dinglasan was not his sister but an operator of “clubs” in Batangas province and Manila that fed him information. “I know her (Dinglasan) from way back. At times, I get information (from her) and validate them,” he said.

“But I can look you straight in the eye that I am not on the take (from gambling operations). I am not even from (Southern Tagalog),” Marantan said. He said he was from Tuguegarao City in Cagayan.

De Lima said the NBI was digging deeper into the police officer’s profile. “We’re quite intrigued about the series of coincidences (controversial shooting incidents in which he was involved),” she said.

In November 2005, Marantan was criminally charged in connection with a purported encounter between operatives of the Highway Patrol Group and the so-called Valle Verde car theft syndicate. Four scions of wealthy families were killed.

In December 2008, he was involved in another police operation against a robbery group in Parañaque City that left 16 people dead, including a migrant worker and his 7-year-old daughter who were caught in the crossfire.

In February 2010, Marantan, then head of the 415th Provincial Police Mobile Group, was caught anew in a controversy involving the deaths of eight suspected kidnappers at a checkpoint in front of his headquarters in Candelaria town in Quezon.

De Lima noted that with this string of purported encounters, the PNP should not have promoted Marantan.

“There should be a red flag to warn the authorities on granting promotion to such kinds of personalities. This kind of incident could have been avoided,” she said.

She lamented the absence of a law that would categorically deny the promotion of a police official without any clearance from the Commission on Human Rights, an agency which she once chaired.

While the NBI had taken over the investigation, Cerbo said the PNP would still continue its own inquiry to determine any possible administrative sanction against Marantan and other policemen involved in the operation.

Asked if Marantan may refuse to cooperate with the PNP investigation, the spokesperson said: “He has to cooperate. Although we gave him leeway initially because he sustained injuries, he has to face the music.”

Cerbo stressed anew that the police officer let members of the PNP fact-finding team to see him in his hospital room but declined to answer questions.

“Let’s just wait for what he has to say, how he would weigh in all these. He may have his own reasons. Maybe he’s considering himself an accused and he is invoking his right to a counsel or to remain silent,” Cerbo said. With reports from Marlon Ramos in Manila and Maricar Cinco, Inquirer Southern Luzon