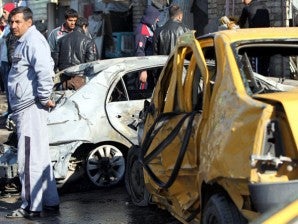 Residents look at damaged cars after a car bomb explosion that killed at least three people and wounded 11 others on January 10, 2013, near a police station in the predominantly Shiite neighbourhood of Hurriyah. The latest violence comes with Iraq mired in a series of interlocking crises that have raised tensions as anti-government protesters have blocked off a key trade route in more than two weeks of ongoing rallies. AFP PHOTO/AHMAD AL-RUBAYE

BAGHDAD — An Iraqi provincial health official says two car bombs have killed at least 11 Shiite pilgrims north of Baghdad, bringing the day’s death toll in a series of attacks to 15.

The latest explosions struck Thursday morning near Dujail, 80 kilometers (50 miles) north of Baghdad, as the pilgrims were heading to a shrine in the town of Samarra.

Raed Ibrahim, the head of the Salahuddin provincial health directorate, provided the death toll and says more than 60 were wounded.

Earlier, another car bomb killed four Shiite pilgrims as they were heading to shrines in the country’s south.

Shiite pilgrims are a favorite target for Sunni insurgents who seek to undermine the country’s Shiite-led government.