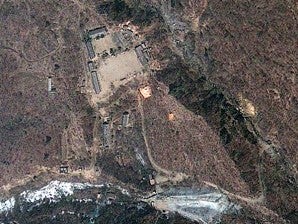 This April 18, 2012 satellite image provided by GeoEye appears to show a train of mining carts, at the lower center of the frame, and other preparations underway at North Korea’s Punggye-ri nuclear test site but no indication of when a detonation might take place, according to analysis by the U.S.-Korea Institute at Johns Hopkins School of Advanced International Studies. AP
FILE PHOTO

SEOUL—Japan’s top nuclear envoy on Thursday urged the UN Security Council to act “sooner rather than later” in punishing North Korea for its long-range rocket launch in December.

“We agreed that the Security Council, on behalf of the entire international community, must take appropriate action,” Shinsuke Sugiyama told reporters after talks in Seoul with his South Korean counterpart, Lim Sung-Nam.

“We are hopeful that the Security Council is responding in an appropriate manner sooner rather than later,” Sugiyama added.

North Korea’s successful launch sparked global security concerns, as well as UN condemnation and calls from the US and its allies for tightened or expanded sanctions.

Pyongyang said the launch was a purely scientific mission aimed at placing a polar-orbiting earth observation satellite in space.

Most of the world saw it as a disguised ballistic missile test that violated UN resolutions imposed after the North’s nuclear and missile tests in 2006 and 2009.

The United States has been liaising closely with Japan and South Korea as it negotiates with China on what action the Security Council should take.

As the North’s sole major ally, China has been resisting tough sanctions, arguing that pushing Pyongyang into a corner could have dangerous consequences.

The US special representative for North Korea policy, Glyn Davies, is due to visit Beijing, Seoul and Tokyo next week.