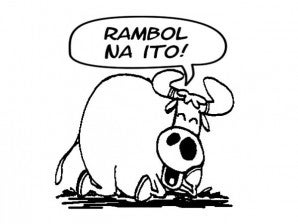 The word war has worsened.

After Sen. Miriam Defensor-Santiago referred to Senate President Juan Ponce Enrile’s defenders as “attack dogs,” Sen. Panfilo “Ping” Lacson drew his guns and called her a “crusading crook” whose “victims … will tell you how much they shelled out” for her “verbal assault” to stop.

This was the latest installment in the Senate saga where Enrile left out four senators when his office realigned the chamber’s P30 million in savings and gave additional maintenance and other operating expenditures (MOOE) to a clique of 18 colleagues.

The verbal tussle turned physical. On Wednesday, Santiago suffered from hypertension so severe that it caused some of the blood vessels to burst in her right eye.

Her media staff quoted Santiago’s ophthalmologist, Rodolfo Chuanico, who explained the effect of her high blood pressure on her eye.

However, the four senators did not get the second tranche of P1.3 million and the third installment of P318,000 given to their 18 colleagues.

Santiago appeared on a morning talk show Wednesday where she singled out one of Enrile’s “attack dogs” for taking the cudgels for the Senate President.

Part of Santiago’s statement, e-mailed to reporters after the talk show, said “one of Enrile’s attack dogs is not a lawyer, but is pretending to be one, and that is why that senator keeps on calling on Santiago to shut up.”

She used the term  “nag-aabu-abugaduhan” (pretending to be a lawyer) during her interview with ANC’s talk show “Headstart.”

“Just because they are senators, they think of their immediate knowledge of the entire universe, of the legal system,” she told “Headstart” host Karen Davila.

“He does not even have a clue about the principle of exhaustion of administrative remedies. He was involved in a court case, and he turned tail and became a fugitive from justice, which is a criminal behavior. That is what you get when a layman filled with hubris pretends to be a lawyer,” she added.

Those who tuned in to the program immediately realized that Santiago had talked about Lacson.

It was Lacson who told Santiago to stop her tirade against Enrile, saying she still got her additional MOOE in November but did not raise a howl.

Lacson added that he would take on Santiago’s challenge for all senators to bare their income, other perks and actual expenses if Santiago herself would take the lead in doing so.

“If that senator wants to participate in the conspiracy of silence, he can, but he should respect my freedom of expression and the public’s right to know under the Constitution. If a dog barks at midnight, the homeowner should go out and search for the intruder, instead of beating the dog,” she said.

Santiago added that her “enemies” were responding to the situation “from a position of total ignorance.”

An obviously upset Lacson responded in a text message sent to Senate reporters. “Sen. Miriam Santiago is what we may call a ‘crusading crook.’  She pretends to be clean when she is not,” he said.

Lacson called Santiago a “hypocrite par excellence” who “doesn’t have a single shred of integrity in her veins and moral ascendancy over any mortal on earth.”

“Ask people who have fallen victim to her verbal threats and assaults and they will tell you how much they shelled out (for her to stop),” he added.

Lacson advised Santiago to “do some soul-searching and self-reflection. She should also stop blaming God for all her hurt feelings.”

Santiago said critics were spreading disinformation that she should shut up because she received Senate savings on previous occasions.

“If I received those funds, it was because they were in modest amounts and distributed during the course of the year. But recently, Enrile authorized a Christmas gift of nearly P2 million to every senator, and at the end of the year,” she said.

Santiago said the “additional MOOE” at yearend was “phony, because in effect, the office closes at the end of the year and therefore there is no more need for additional office expenses.”

“Starting January, every senator will receive his monthly allocation of P2.2 million, half of which will go to personal services and half to office expenses. So I ask: ‘Why give so-called additional MOOE at yearend, when the Senate has effectively closed for the year, and new MOOE will be given in January?’” she said.

Santiago’s staff added that former Health Secretary Esperanza Cabral, Santiago’s cardiologist and friend, was being contacted to look into the senator’s condition.

Santiago’s right eye was said to be noticeably red and with red blood clots around the pupil after appearing on the TV talk show. With a report from Norman Bordadora