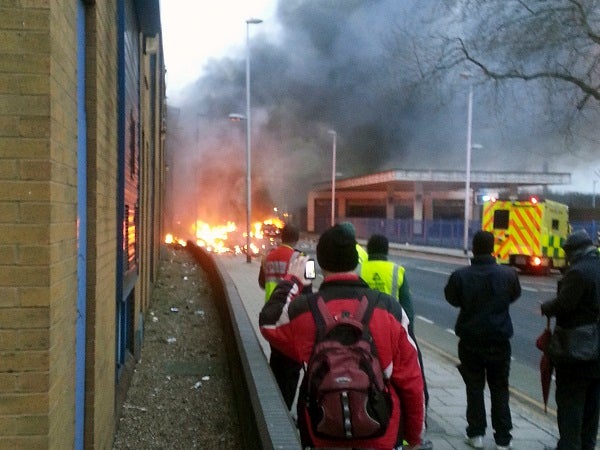 A general view of the scene shortly after a helicopter crashed in the Vauxhall area of central London, after hitting a crane on top of a tower block by the River Thames, according to eye witness reports, Wednesday Jan. 16, 2013. AP/Toby Scott, PA

LONDON — A helicopter has crashed during rush hour in central London after apparently hitting a construction crane on top of a building, police said.

The helicopter crashed just south of the River Thames near the Underground and mainline train station at Vauxhall, and British spy agency, MI6.

“It is too early at this stage to confirm any casualties,” Metropolitan Police said in a statement.

A photo shown on Sky News showed wreckage burning in a street, and a large plume of black smoke was seen rising in the area. Video from the crash scene showed a line of flaming fuel and debris.

London Fire Brigade said it was called at 8 a.m. to a report of a crash on Wandsworth Road on the south bank of the Thames.

“There was a flash and the helicopter plunged to the ground. It exploded and you can imagine the smoke coming out of it,” Paul Ferguson, an office worker near the scene, told BBC News.

Erin Rogers, who was waiting a bus stop near Vauxhall Station, said she “heard a bang and saw bits of crane debris falling to the floor.”

“Then the helicopter was in flames. The rest of the people at the bus station were looking on going ‘What was that?'”

Police said the helicopter appeared to have hit a crane.

The area, roughly ten blocks from the major Waterloo train and Underground station, is extremely congested during the morning rush hour. Many commuters arrive at the main line stations from London’s southern suburbs and transfer to busses or trains there.

“There are tons of emergency services about, and it looks like a helicopter hit a crane of one of the apartment buildings being constructed round there,” said Jon Hoeksma, a local businessman.