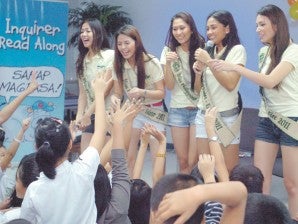 In hell or high water, they didn’t disappoint.

Heavy rains and floods did not stop reigning Miss Earth beauty queens from here and abroad from trooping to the Inquirer on Saturday morning to stress the importance of environmental protection.

Winners of the 2011 Miss Philippines Earth pageant, led by Miss Philippines-Earth Athena Imperial, kicked off the session with a brief presentation on the environmental hazards posed by plastics.

The book was published by Adarna House and the Miss Earth Foundation.

Returning storyteller Dyali Justo read Adarna’s “Isang Mayang Uhaw” by Victoria Añonuevo, a story about a resourceful bird who finds a way to drink water from a glass.

The Miss Earth beauties were no strangers to working with children as they had also participated in similar activities in their hometowns.

“Today’s kids are very smart and disciplined and they can grasp information really well,” Faria noted.

Hailing from India, Faria had also engaged in volunteer work as a teacher in her hometown. “I’m going to use this experience as a motivational tool when I get back home. I’d tell our kids there, ‘You know the kids in Manila? They were so behaved and participative.’ I hope that inspires them.”

Wattanakoon, the titlist from Thailand, had the same observation: “The children were very participative. They really impressed me. I hope the kids back in Thailand can be this confident, too.”

“I loved today’s session,” said Shchukina, a Russian. “I wish we could do it again.”

The children braved the early morning rain and floods to make it to the Inquirer main office in Makati City for the session. Among them were 18 wards from the Virlanie Foundation’s Tanglaw Home, also in Makati.

“We really make it a point to bring the children to the read-along sessions so that they will be encouraged to read. But because of the rains this morning, we initially thought it would be best to skip today’s session,” said their guardian Salve Bance-Coloma.

The children, however, “complained,” she said. “They insisted on attending the session despite the weather.”

Eight-year-old Erika Rueda expressed her resolve: “We really wanted to come because we always enjoy the sessions.”

“We get to read new stories, meet celebrities and learn new things. Today, I learned how to conserve water and how to dispose of trash properly,” Rueda said.

Twelve-year-old Ma. Sofia Garong of Pasig Elementary School was at first reluctant to go to the session because of the rains and heavy traffic.

“It was worth it. I really enjoyed the experience,” Garong said after overcoming her fears and making it to the Inquirer. “The stories taught me a lot of lessons. I learned to be more concerned about climate change.”

Patrice Cabug, a Grade 6 student from Palatiw, said she was “surprised that the session turned out to be fun.”

“I have always loved to read but I particularly liked the Miss Earth readers. They really know how to relate to kids,” Cabug, who considered herself a bookworm, said.

Hosted by Junior Inquirer editor in chief Ruth Navarra, the July 30 session was held in cooperation with Cathy Untalan and the Miss Earth Foundation.

Reusable bags courtesy of Envirosax and books courtesy of Vibal Publishing were also given away as prizes during the question-and-answer portion.

Saturday’s read-along session capped a series of such sessions held in July, which included 14 simultaneous sessions at SM malls nationwide on July 19 in celebration of National Children’s Book Day and a special session with “handi-capable” artists at Rizal Park on July 16.

On July 9, children’s show host Tonipet Gaba read a story to around 40 children in a session marked by the first commercial appearance of mascots from the children’s show “Sabadabadog.”