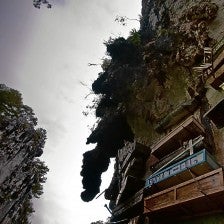 A PLAN to build a new road leading to these burial sites was suspended amid protests. RICHARD BALONGLONG/INQUIRER NORTHERN LUZON

BAGUIO CITY—Following protests from local officials and residents, the Department of Public Works and Highways (DPWH) has suspended the bidding for a road project that would shorten travel to the caves of the tourist town of Sagada in Mt. Province.

Yodong said Sagada officials complained that instead of the much shorter route through Barangay Balili, the road project would have traversed through Barangay Madepdepas, which has a gravel path, requiring more funds for a new road and a bridge because of a river separating Sabangan and Sagada in that part of the province.

According to the bid invitation documents of the DPWH Cordillera office, the upgrading of the Sabangan-Sagada Road would cost at least P96 million.

Yodong said changes in the project were done by top officials in the province. “Why use the name of Sagada for another infrastructure project?” Yodong said. Desiree Caluza, Inquirer Northern Luzon

Read Next
Court issues TRO to keep Aga on voters’ list
EDITORS' PICK
Gordon calls 2 Pharmally execs ‘Senate fugitives’ after no-show in probe
Legarda emphasizes role of ICC/IPs in nation building this IP month
What’s at stake for every fighter at ONE: NextGen
Climate Change Commission and Nestlé PH to discover sustainability-focused solutions
Isko Moreno bares ‘two-pronged’ approach to rehabilitate MSMEs
NCR’s COVID-9 alert level may be downgraded from 3 to 2 soon — DOH
MOST READ
LJ Reyes says Paolo Contis made ‘no efforts’ to talk to her after their split
Gordon to Duterte: You? Teaching me courtesy?
Gordon calls 2 Pharmally execs ‘Senate fugitives’ after no-show in probe
PDP-Laban Cusi wing Senate bets willing to give way to Duterte
Don't miss out on the latest news and information.