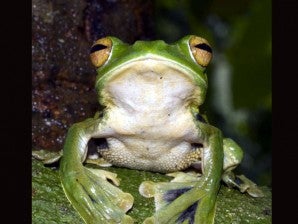 This handout picture taken by Jodi Rowley in 2009 and released by Australian Museum on Jan. 15, 2013, shows Helen’s Flying Frog, a new species of flying frog in Nui Ong Nature Reserve, Binh Thuan Province. An Australian researcher who discovered a new species of flying frog near Ho Chi Minh City in Vietnam and named it after her mother said on January 15 it was a rare find so close to such a big city. AFP PHOTO / AUSTRALIAN MUSEUM/JODI ROWLEY

SYDNEY—An Australian researcher who discovered a new species of flying frog near Ho Chi Minh City in Vietnam and named it after her mother said Tuesday it was a rare find so close to such a big city.

Helen’s Flying Frog was first discovered by Jodi Rowley, an amphibian expert from Sydney’s Australian Museum, in 2009 during a field trip to the forests fringing the city previously known as Saigon.

Rowley initially thought the tree-dwelling flying frog, so named for the huge webbed feet that allow it to glide or parachute across the forest canopy, was a familiar species when she saw it sitting on a log beside a path.

It was not until a later trip, when she saw a specimen of the original type of frog in another part of Vietnam, that she realized her creature was something quite different.

“There’s also differences in the color of the webbing, color of the thighs, and we did look at body type as well so it does seem to be bigger than the other species.”

Molecular analysis confirmed Rowley’s suspicions and she had the honor of naming the new species rhacophorus helenae or Helen’s Flying Frog after her mother, who had recently been diagnosed with ovarian cancer.

She said the “big, impressive” species, which is 10 centimeters (four inches) long was a surprising find in the low-lying evergreen forest surrounded by rice paddies on the fringes of Ho Chi Minh City, Vietnam’s most populous city.

“What’s rare about this discovery in particular is the fact that I found the lone individual less than 90 kilometers from the middle of Ho Chi Minh City, one of the biggest cities in Southeast Asia,” said Rowley.

Researchers are now working to establish whether Helen’s frog is endangered. Specimens have only been seen in the lowland forests of southern Binh Thuan and Dong Nai provinces and Rowley said there were real fears for its survival.

“We are worried particularly because it is a lowland forest and it’s the same kind of forest (as where) the Javan rhinoceros went extinct in 2011 as well. Habitat loss is a huge issue,” she said.

Rowley’s discovery, made with researchers from Ho Chi Minh city’s University of Science, was published in the latest issue of the Journal of Herpetology.