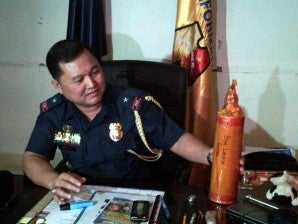 MANILA, Philippines—One person has been killed since the election gun ban started this year while at least 16 total firearms have been confiscated across the country, a police spokesman said Tuesday.

Chief Superintendent Generoso Cerbo Jr., Philippine National Police (PNP) Spokesman, said that Fernando Morales was killed after he fought back at police who were serving a warrant of arrest to him in San Juan, Batangas Monday around 1:30 a.m.

Morales was an alleged cohort of jueteng lord Victor Siman, who was killed in the recent shooting in Atimonan, Quezon along with 12 other reported criminals. Morales’ wife reportedly claimed that the police did not properly introduce themselves and did not show the warrant before they dragged Morales and shot him.

Cerbo also said that they have confiscated 16 firearms, five high-powered and 11 low-powered, since the election gun ban began on January 13.

The most number of confiscated firearms came from the National Capital Region Police Office (NCRPO) with four while three firearms were confiscated in Region 1 (Ilocos region), Cerbo said.

One grenade/explosive was also confiscated in the NCRPO, according to their statistics.

The confiscations of weapons ended in 12 arrests, two of whom were government employees, Cerbo said.

In the NCRPO, four persons have been arrested so far while in Region 1 (Ilocos region) two government employees were arrested and one civilian, he said.

Because of the current gun ban being implemented, it becomes easier for authorities to catch criminals through the help of concerned citizens, he said.

“With this gun ban campaign, if a person is found bearing guns, the general assumption is he could be a criminal,” Cerbo said.

“They can report it to police and we will immediately respond,” he added.