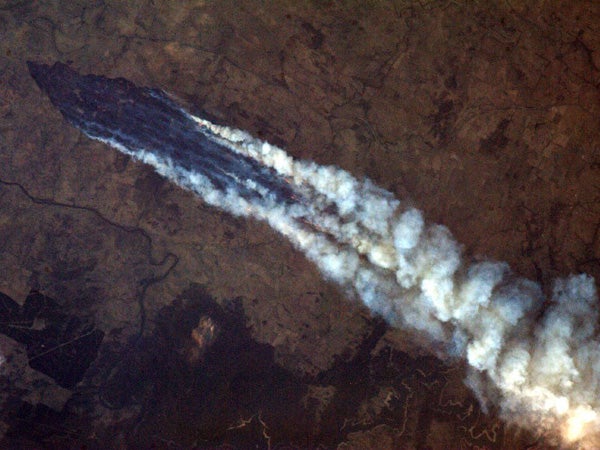 This photo taken on January 10, 2013 and released to AFP via the Twitter account of Canadian astronaut Chris Hadfield (@cmdr_hadfield) shows Australian bushfires burning near Burrinjuck Dam in Australia’s state of New South Wales, taken by Commander Hadfield from on board the International Space Station high above Australia. Firefighters were battling scores of wildfires raging in Australia on January 12, 2013, as a government commission warned that climate change had raised the risk of scorching heatwaves becoming more frequent. In the eastern state of New South Wales, some 1,000 firefighters were attempting to douse about 94 wildfires, about dozen uncontained, while fires were also burning in neighbouring Victoria and Queensland states. AFP / Chris Hadfield / NASA

As the 250 lead authors of the Intergovernmental Panel on Climate Change (IPCC)’s next major report meet in the southern Australian city of Hobart, the body’s chairman Rajendra Pachauri said the link was clear.

“If you look at the trend then I think that’s pretty unmistakable and any proper analysis would tell you that we are heading in that direction,” Pachauri told the Australian Broadcasting Corp.

Pachauri said the planet was in line for a temperature rise of “anywhere from 1.1 degrees Celsius to 6.4 degree Celsius” (2.0 to 11.5 degrees Fahrenheit) by the end of this century.

“Now this depends on the kind of economic growth you get, a whole lot of other drivers that would essentially lead to climate change,” he said.

“But if you’re going to end up towards the upper end, then that clearly is a very, very serious outcome that we’re looking at.

Asked about his worries about climate change, he said: “Yes, I am concerned no doubt, but I also have a high opinion of human wisdom that I think at some stage we will bring about change.”

Australia has experienced extreme summer heat, increasing the dangers from scores of bushfires which have destroyed more than 100 homes.

Most of these were on the southern island of Tasmania which is known for its cooler climate and where IPCC authors are meeting.

The government’s Climate Commission warned at the weekend that the current weather was a taste of things to come, with heatwaves likely to be more frequent and intense in the future.

Scott Power, one of the experts in Hobart for the talks, said bushfires and hot weather were all “part and parcel” of living in Australia during summer but climate change increased the likelihood of such events.

“It’s clear that these sorts of things do become more common under climate change,” Power told a news conference ahead of the talks.

The experts gathered in Hobart are working on the IPCC’s report due in September.

Pachauri said the leaking of parts of its draft was “very unfortunate” but gave no indication of the final version as he defended the IPCC’s attempt to be inclusive and to get as many expert reviews as possible.

“I’m absolutely certain that what we will get is a very solid, very robust and scientifically defensible report,” he said.

In the latest leak, blogger Donna Laframboise published thousands of pages of the draft last week, denouncing what she called a lack of transparency in the process and claiming the IPCC was attaching too much weight to the input of environmentalists rather than scientists.