Palace: No successor yet to disaster czar | Inquirer News

Palace: No successor yet to disaster czar 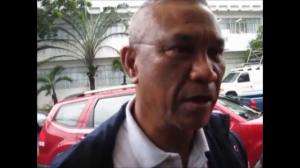 Contrary to reports, President Aquino has not appointed a replacement for Benito Ramos, who resigned Friday as executive director of the National Disaster Risk Reduction and Management Council (NDRRMC), Malacañang said Monday.

The President was inclined to accept Ramos’ resignation, but he had yet to act on it and appoint a replacement, according to presidential spokesperson Edwin Lacierda.

Despite Palace denials, the outgoing Office of Civil Defense  chief on Monday briefed one of the “recommended” successors to his post, which he will relinquish on Feb. 1.

Ramos said Defense Secretary Voltaire Gazmin had recommended that retired Maj. Gen. Eduardo del Rosario replace him, although he was quick to  add that Del Rosario’s visit to the NDRRMC Monday was just an “orientation” and not a “turnover.”

“He just paid us a visit,” Ramos said. “We would like to be sure that we are not preempting any plans. We can give others who have been recommended to the post the same orientation,” he added.

For his part, Del Rosario, who led the search and rescue for the late Interior Secretary Jesse Robredo after his plane crashed in Masbate waters in August, said he had big shoes to fill should Mr. Aquino appoint him.

“It’s hard to fill his shoes. He is a media darling,” Del Rosario said of Ramos. “If I could only give 50 percent of his brilliance, eloquence and great sense of humor, then I think I’d already have a passing grade,” he added.

Lacierda acknowledged that Del Rosario was among those recommended for Ramos’ post, but added that no replacement could be named until Ramos’ resignation takes effect on Feb. 1.

“First of all we don’t know if (Ramos’) resignation has been accepted,” Lacierda said. “Second, if it has been accepted, President Aquino has not (yet) appointed a replacement. So there won’t be a turnover without a valid appointment from the appointing authority.”

Lacierda said Gazmin had informed the President of Ramos’ resignation after last Friday’s vin d’honneur in Malacañang. He said Ramos resigned to take care of his wife who was suffering from diabetes.

“The President, in that meeting, never categorically stated that he was accepting (Ramos’) resignation but he seemed inclined to do so,” Lacierda said.

Ramos said he had worked with Del Rosario in the Army’s Special Forces when he was a battalion commander in Mindanao and the latter was a young lieutenant.

But the retired officer, Ramos added, was “more handsome and a lot fairer than me.”

Del Rosario retired from the military service late last month. The last position he held was that of 2nd Infantry Division commander. He was also the acting Southern Luzon Command (Solcom) chief.

Often briefing reporters on the impact of a typhoon in an archipelago crossed by some 20 cyclones a year, the media-savvy Ramos had become the face of the government response to disasters.

“Nature teaches us to be resilient,” he said, apologizing for the times when his projections fell short of the actual devastation wrought by powerful typhoons.

Turning serious, the usually effusive official said that while he was not a doctor, he knows that he has to spend “the twilight of our years” with his ailing wife. Ramos said his wife’s brother and sister both died of complications due to diabetes, the same debilitating ailment afflicting her.

Ramos said he also wanted to bond with his children, who had become quite “aloof” after he spent a lot of time away from them as an Army man.

Asked how much time he had spent at the NDRRMC, Ramos quipped: “If your dog starts barking at you, that means you haven’t been home for a long time.”