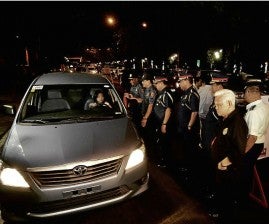 COMELEC CHECKPOINT Commission on Elections Chairman Sixto Brillantes Jr. and police officers inspect vehicles at a Comelec checkpoint along Quirino Avenue in Manila as the gun ban during the elections formally started nationwide at midnight Saturday. RICHARD A. REYES

With the five-month election period officially starting Sunday, politicians running in the May 13 balloting will now have to give up their bodyguards unless they are authorized to retain them.

The Commission on Elections (Comelec) on Sunday reminded candidates that should they wish to keep their security escorts, they must file an application in the poll body first.

Under Comelec Resolution No. 9561, all existing authority granting protective security personnel or bodyguards are considered revoked during the 120-day election period.

But this exempts the President and his Cabinet secretaries, the Vice President, senators who are not running for reelection, justices and judges, the chairman and the commissioners of the poll body, the chief of staff and the major service commanders of the Armed Forces of the Philippines, and the director generals and senior officers of the Philippine National Police.

The Comelec rules also indicate that senatorial bets may only be assigned a maximum of two members of the PNP and the AFP or the National Bureau of Investigation as security.

Local candidates may engage the services of no more than two duly licensed or authorized protective agents of private detective agencies or accredited private security agencies to act as their bodyguards during the election period.

But Comelec Commissioner Elias Yusoph, head of the committee on the ban on firearms and security personnel, stressed that businessmen in the country were not among those allowed to employ bodyguards until after the May 13 midterm elections.

“Businessmen who have threats to their lives may apply but they will have to prove to the committee that their lives are in danger,” Yusoph told reporters on Friday. “These applications will be evaluated by the committee,” he said.

Yusoph added that once the committee has validated the existence of death threats, they will be allowed to employ two private bodyguards.

He said the committee would still have to agree on a more clear-cut rule on the provision of security detail to congressmen—some of whom have bodyguards from the PNP.

“[It is not] clear yet as regards to the congressmen who presently have regular PNP men [for their security] because under our resolution, local officials are only entitled to engage the services of private protective agencies,” Yusoph said.

Under Comelec rules, he said, congressmen are considered local candidates since they are being elected locally.

“The number of policemen couldn’t accommodate all the candidates if we include those running for local positions. The policemen are already outnumbered,” he pointed out.

The Comelec also said those assigned to secure candidates during the election period must wear their authorized uniforms and their identification cards and must bear the required certificate of authority from the Comelec.

Security escorts will be allowed to carry only two firearms throughout the entire election period.

Also on Sunday, Interior Secretary Manuel Roxas led a “unity walk” of some 3,000 government officials and private individuals aimed at ensuring peace and order during the election.

The symbolic event, dubbed “Unity Walk and Inter-Faith Prayer Rally for Secure and Fair Elections in 2013,” kicked off from several areas in Metro Manila and converged at Quezon Memorial Circle in Quezon City at dawn.

“As election period starts today, the different arms of the government joined the private sector and the civil society to show our unity to make sure that the coming elections will be safe,” Roxas told the gathering.

Chief Supt. Generoso Cerbo Jr., PNP spokesperson, said thousands of joint police and military checkpoints had been set up under the supervision of the Comelec as part of the government’s security preparations for the elections.

“The first day of the implementation of the gun ban turned out fine. There was no reported untoward incident or shootout. Overall, it went smoothly,” he told the Inquirer over the phone.

Purisima also issued a reminder that police and security personnel not on duty are not exempted from the gun ban. With a report from Marlon Ramos