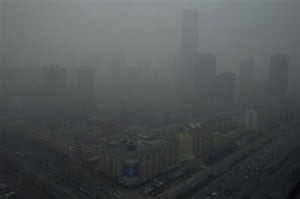 BEIJING—Mask-wearing Beijing residents endured a third day of pollution at hazardous levels on Sunday, as authorities warned that a thick cloud of smog may not lift from the Chinese capital until midweek.

As the dense smog shrouded large swathes of northern China, flights were canceled and traffic was delayed as visibility was reduced to 100 meters in some areas.

Air quality in Beijing showed small airborne particles with a diameter small enough to deeply penetrate the lungs at a reading as high as 993 micrograms per cubic meter on Saturday evening, the warning center said, according to the official Xinhua news agency.

The World Health Organization says the figure for such particles, known as PM2.5, should ideally be no more than 25 micrograms per cubic meter.

“These figures represent extremely bad pollution. Pollutants have gradually accumulated over the course of recent windless days, making the air quality even worse,” said Zhu Tong, a professor from the college of environmental sciences and engineering at Peking University.

The pollution is expected to engulf Beijing until Wednesday before wind arrives to blow it away, according to a weather report from the meteorological station, Xinhua said.

Ten flights had been canceled and five delayed by more than an hour at Beijing Airport by 11 a.m. (0300 GMT) Sunday, the airport said.