6 arrested in new rape of a bus passenger in India 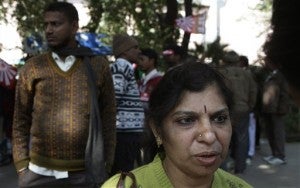 Gita Ganeshan, a 52-year-old bank worker, speaks to the Associated Press in New Delhi, India, Thursday, Dec. 20, 2012. Ganeshan moved to New Delhi with her husband four years ago to protect their oldest daughter after she was attacked in the Indian capital, where she was studying. AP

NEW DELHI — Police say six men have been arrested in another gang rape of a bus passenger in India, four weeks after a deadly attack on a student on a moving bus in the capital outraged Indians and led to calls for tougher rape laws.

Police say a 29-year-old woman was traveling on a bus to her village in northern Punjab state on Friday and was the only passenger. The driver and conductor allegedly drove her to a desolate location and took her to a nearby building where they were joined by five friends and raped her repeatedly.

Police say they arrested six suspects on Saturday and are searching for another.

The brutal rape of a student on a New Delhi bus in December set off an impassioned debate about what India needs to do to prevent such tragedies.