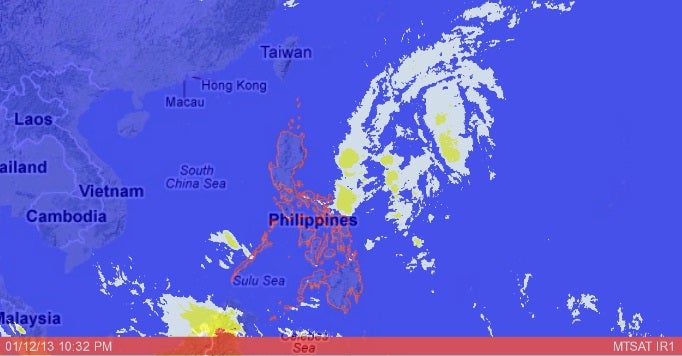 MANILA, Philippines—A low-pressure area affecting Mindanao on Saturday moved northwest  toward Luzon and developed into a tropical depression named “Bising,” the weather bureau said. It however is not expected to make landfall.

The second tropical cyclone to hit the Philippines this year, Bising was packing peak winds of 45 kilometers per hour and was forecast to continue its northward movement, the Philippine Atmospheric, Geophysical and Astronomical Services Administration (Pagasa) said.

But by mid-Saturday, the storm signal was lifted in all areas except Catanduanes, which bore the brunt of the depression.

As of 4 p.m. on Saturday, the center of  Bising was estimated at 390 km east of Baler, Aurora, with maximum sustained winds of 45 kph near the center. It is forecast to move north northeast at 22 kph.

In its latest weather bulletin, Pagasa said Luzon except for Palawan would experience cloudy skies with light to moderate rain showers and thunderstorms. The rest of the country will be partly cloudy with brief rain showers or thunderstorms.

Bising was expected to bring moderate to heavy rainfall (5-15 mm per hour) within its 300-km diameter.

At least six domestic flights at Ninoy Aquino International Airport were cancelled Saturday due to the bad weather.

A total of 2,867 passengers, 177 rolling cargoes, 18 vessels and three motor bancas were stranded at ports in eastern Visayas and Bicol as of Saturday noon due to rough seas, according to the Philippine Coast Guard. With reports from Jerome Aning and Tina G. Santos