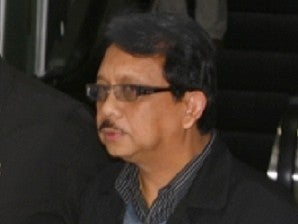 MANILA, Philippines – Senators who received millions of pesos from Senate President Juan Ponce-Enrile should return the money to the treasury or else they will be included in a complaint that will be filed against Enrile, an anti-crime group said on Saturday.

“Please return the cash you received from Senate President Juan Ponce-Enrile,” Dante Jimenez, head of the Volunteers Against Crime and Corruption (VACC), said in a text message.

“Otherwise, we will include you in our complaint to be filed against Enrile as accomplices on this unethical and immoral act and practice of cash gifts given out of savings from the Senate budget,” he said.

Jimenez said they would file the complaint against Enrile at the Senate committee on ethics next week in connection with the millions of pesos he allegedly distributed to senators last week.

Only four, aside from Enrile, did not get the P1.6 million and they were Senate Minority Leader Alan Peter Cayetano, Senators Pia Cayetano, Antonio “Sonny” Trillanes IV and Miriam Defensor-Santiago.

All four are known political foes of the Senate leader.

Aside from the total P2.2 million that he gave to the senators, Enrile also gave P250,000 each senator from the savings of his own office.

Jimenez said all these money should be returned to the treasury.

“[The savings] must be returned to the treasury for other more important needs of our people who have been victims of natural calamities,” he said.