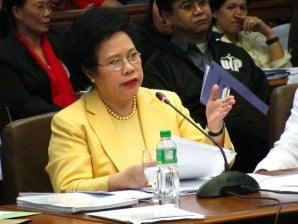 MANILA, Philippines – Senator Miriam Defensor Santiago believes that a college degree should be a requirement enshrined in the Constitution for elected officials.

“We should professionalize important local and national offices by imposing academic qualifications,” Santiago, a constitutional law expert, said in her speech at the Centro Escolar University Friday.

“If we require members of local and national bureaucracies to be degree holders, there is no reason why we should not do the same for mayors, governors, congress people, senators, and presidents,” Santiago said.

The current 1987 constitution’s requirements for a person to be elected president is that “he is a natural-born citizen of the Philippines, a registered voter, able to read and write, at least forty years of age on the day of the election, and a resident of the Philippines for at least ten years immediately preceding such election.”

Santiago said that requiring leaders to have college degrees would help the country compete on the international level.

“If we want global competitiveness, we should require our leaders to be, at the very least, formally educated. This is because education is a powerful constraint against narrow parochialism and a gateway to ideas that can change communities,” Santiago said.

“The best place to impose this requirement is in the Constitution,” she said.

President Benigno Aquino III, however, had previously stated that changing the Constitution was not a priority of his administration despite calls that it was the proper time for Charter change.

“President Aquino has good reasons not to prioritize charter change, because some estimate place the cost of a constitutional convention at some P8 billion,” Santiago said.

Aside from adding the college degree requirement, Santiago said that “a working mechanism for initiative and referendum” should be included in the Constitution.

“Laws that are difficult to pass such as the Political Dynasty Law and the Freedom Of Information Law can become realities with the proper use of initiative and referendum,” she said.

The Anti-Political Dynasty Bill aims to limit related politicians being elected into government and is still pending in Congress while a freedom of information bill in the Senate known as People’s Ownership of Government Information (Pogi) Bill has already been passed by the Upper House.

“These twin mechanisms also allow the citizens to directly participate in legislation, which is good because it makes our democracy more participatory,” Santiago added.

She also said she wanted to remove the power of the president to appoint members of the judiciary in the Constitution so as to ensure the independence of judges.

Santiago further told the students that “we should limit the corrupting power of pork barrel in the Constitution”.

“In my view, the pork barrel system has had the effect of inflating the cost of public office, distracting legislators from their real work, and unduly empowering the executive department, to the detriment of the public and the principle of separation of powers,” she said.

“We should place mechanisms in the Constitution to ensure pork barrel (1) does not line the pockets of politicians, and (2) does not become a discretionary fund that can be dangled by the President to promote transactional politics,” she added.