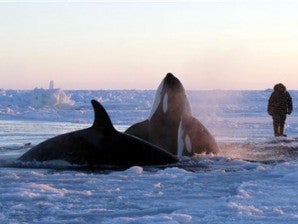 In this Tuesday, Jan. 8, 2013 photo provided by Marina Lacasse, killer whales surface through a small hole in the ice near Inukjuak, in Northern Quebec. Mayor Peter Inukpuk urged the Canadian government Wednesday to send an icebreaker as soon as possible to crack open the ice and help the pod of about a dozen orcas find open water. The Department of Fisheries and Oceans said it is sending officials to assess the situation. (AP Photo/The Canadian Press, Marina Lacasse) MANDATORY CREDIT

MONTREAL—About a dozen killer whales trapped under sea ice appeared to be free after the ice shifted, village officials in Canada’s remote north said, while residents who feared they would get stuck elsewhere hired a plane to track them down.

The whales’ predicament in the frigid waters of Hudson Bay made international headlines, and locals had been planning a rescue operation with chainsaws and drills before the mammals slipped away.

Tommy Palliser said Thursday that two hunters from remote Inukjuak village reported that the waters had opened up around the area where the cornered whales had been bobbing frantically for air around a single, truck-sized hole in the ice. Officials said shifting winds might have pushed the ice away.

But fears remained that the whales might have been trapped elsewhere by the ever-moving ice. Some villagers were skeptical the killer whales had escaped harm, so the community hired an airplane to scan the region Thursday for signs of the pod.

Mark O’Connor of the regional marine wildlife board said the aerial search did not locate the orcas, but he noted that large swaths of ice-free water were seen in the area.

“So as far as I could tell, the emergency, for sure, is averted,” said O’Connor, the board’s director of wildlife management.

“Whether the whales have found a passage all the way to the Hudson Strait, we probably will never know.”

Locals said the whales had been trapped for at least two days. A recent, sudden drop in temperature may have caught the whales off guard, leaving them trapped The cornered animals were first seen Tuesday and appeared to have less energy by late Wednesday, Palliser said.

Canada’s Department of Fisheries and Oceans said government icebreakers were too far from the area to smash the ice to free the whales, Inukjuak Mayor Peter Inukpuk said Wednesday.

After that, Palliser said, locals had agreed to try to enlarge the breathing hole in the ice and cut a second opening using chainsaws and drills.

“We certainly had our prayers with them last night during our meeting,” he said.

The Department of Fisheries and Oceans issued a statement Thursday saying two scientists were en route to gather information and will monitor the situation. Ice-trapped marine mammals are not unusual in the region.

Pete Ewins, an expert in Arctic wildlife at the World Wildlife Fund Canada, said the orca were still 1,000 kilometers (621 miles) from where they should be at this time of year.

“They got stuck (in Hudson Bay) and they’re unlikely to get out,” said Ewins, adding that killer whales are not accustomed to ice.

“These guys are on the edge and they might not make it through.”