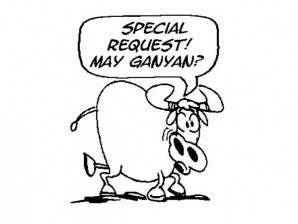 The gun enthusiast that he is, President Aquino has asked the Commission on Elections (Comelec) for a “personal” exemption from the election gun ban, an election official said yesterday.

Comelec Commissioner Elias Yusoph said the poll body on Thursday morning received a letter from Mr. Aquino, who asked that he be allowed to carry around a “short firearm” during the elections.

“He is asking for a personal exemption for his short firearm. He will go through the same process. No special treatment, just the same treatment as the others,” Yusoph said in an interview.

On Tuesday, Comelec Chairman Sixto Brillantes Jr. hinted that the President might not get exempted from the election gun ban, which begins on Jan. 13 and ends on June 12.

He said the Comelec exempted the security detail of ranking government officials but not the officials themselves.

Asked about this, Yusoph said: “That’s why we will evaluate…. But also, that is why he [Mr. Aquino] has the PSG (Presidential Security Group) to secure him anyway.”

Brillantes said the security detail of key offices like the Office of the President, Supreme Court, or law enforcement agents could be exempted from the gun ban but they still have to formally apply in the Comelec.

Comelec Resolution No. 9561 prohibits anyone from carrying firearms outside homes and places of business unless authorized in writing by the election body.

The ban also covers airguns, airsoft guns or replicas of firearms in “whatever form that can cause an ordinary person to believe that they are real. Also banned are shootfests.

Any violation of the ban is considered an election offense punishable by up to six years in prison and disqualification from holding public office.

In Villasis, Pangasinan province, top officials of the Comelec participated in a shootfest on Thursday, three days before imposing the gun ban.

Brillantes joked that the 7th Commissioner Armando Velasco Cup, an invitational shooting competition that was joined by four Comelec regional directors, should be called the “bang before the ban.”

Velasco, a former Comelec director in the Cordillera, is scheduled to retire next month.

Brillantes, who opened the competition, took the first shot using a revolver. He and Velasco were the only poll commissioners at the event.

There are proposals for a total gun ban because of the death of 7-year-old Stephanie Nicole Ella of Caloocan City due to a stray bullet during the New Year’s Eve revelry, the massacre of eight people, including children, by a gunman on Jan. 4 in Cavite, and the supposed shootout in Quezon on Jan. 6 that left 13 people dead, including police officers.