Tagle: Nazarene devotees should reflect on their relationship with God | Inquirer News

Tagle: Nazarene devotees should reflect on their relationship with God 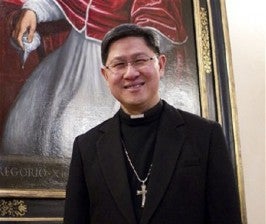 MANILA, Philippines—Manila Archbishop Luis Antonio Cardinal Tagle urged devotees of the Black Nazarene to reflect on their relationship with God and challenged them to become witnesses of His love, which has been manifested in the image of the suffering Jesus Christ.

He said the image of the Black Nazarene-kneeling in agony under the weight of the cross—was the true image of God’s love for the people. “God’s love was manifested through Jesus Christ’s self-abandonment and willingness to be stripped of His dignity,” said Tagle in Filipino, addressing roughly 500,000 people that descended in droves at the Quirino Grandstand to attend the Mass held at dawn on Wednesday.

Tagle said devotees must only look at the Black Nazarene to realize His unparalleled love for man. He also said that like the Black Nazarene, they must learn to deny themselves of things that could strain their relationship with God.

Sadly, he said, many people today would give more attention and importance to their jewelry and their cell phones than finding time to talk with God.

He also lamented the spate of killings happening inside and outside the country, saying that “money that should be spent on food, housing and education is being spent on things that kill.”

“There are some people who carefully look after their jewelry but they don’t even give attention to Jesus,” he said.  “Some even think they are going to die without their cell phones…they trust their cell phones more than Jesus Christ.”

“Some talk to their plants upon waking up in the morning without even talking to Jesus first. Some even give special food to their pet cats and dogs but they let their house-helpers eat spoiled food,” said the prelate.

“True devotees of the Black Nazarene should fight all kinds of deception that destroy people, the society and son of God…a genuine devotion should result in love and in becoming witnesses to the love and sufferings of Christ.”

He also hoped that more people would spread the “truth that life is sacred.”

“There are many reports of killings nowadays. There are many wars in various parts of the world. The money that should be spent on food, housing, schools is being spent on things that kill,” Tagle noted.

“We need to become witnesses to the truth that Christ came to this world not to endanger people but to give them life in peace,” he added.

Even before Cardinal Tagle concluded his homily during the Mass to kick-off the grueling procession of the iconic Black Nazarene, maroon-clad pilgrims broke police barricades at the heavily guarded Quirino Grandstand in Manila to get closer to the image.

The sudden surge of barefoot men and women, bearing colorful banners, cheering and waving handkerchiefs near the stage drowned out an appeal from Tagle to keep calm and to focus first on the Mass that was being celebrated.

While some were appeased, the others persisted, pushing their way through the faith-fueled frenzy to find a good spot to mount the carriage and touch the miraculous statue of the mulatto Jesus Christ.

Msgr. Jose Clemente Ignacio, rector of the Minor Basilica of the Black Nazarene in Quiapo, said the fervid demonstrations of faith by the devotees were understandable.

“They really want to get close to the image of the Black Nazarene. They want to be the first to touch it and get hold of the rope used to pull the carriage,” Ignacio told reporters later in an interview.

Even if the image of the Black Nazarene could be regularly visited at the Quiapo Church, its home for more than 200 years, pilgrims are drawn to the traditional traslacion (the transfer of the Nazarene) each year in the belief that the heavens shower tremendous blessings when the faithful are gathered in mammoth crowds, according to Ignacio.