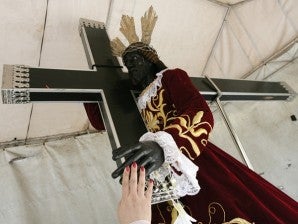 MANILA, Philippines—Why do they keep coming back, barefoot, and in their millions?

The hordes of devotees who will descend on Quiapo, Manila, on Wednesday for the Feast of the Black Nazarene keep coming back and are growing in number because they “encounter the Divine” in the grand procession, one most the most spectacular expressions of religiosity in predominantly Catholic Philippines, a Church official said.

Monsignor Jose Clemente Ignacio, rector of the Minor Basilica of the Black Nazarene, said the feast is a unique expression of Filipino spirituality and popular piety “to experience `heaven’ even for a short glimpse.”

He admitted that there are “abuses” that need to be “purified” but he defended the feast from accusations that it was fomenting “fanaticism and idolatry.”

“Kissing or holding on to the statues is not worshiping statues, it is connecting to the divine, to touch and be touched by heaven itself,” Ignacio said.

“It has been asked of me, why do you allow people to touch the statue? Isn’t it bordering on idolatry? I guess, the view behind that question isn’t really Filipino. Filipinos are a people of `the concrete,'” he said.

“It is a Filipino trait to want to wipe, touch, kiss, or embrace sacred objects if possible. We Filipinos believe in the presence of the Divine in scared objects and places,” he added.

“This is a way of expressing one’s faith. It is an expression of their devotion. We all know we don’t worship statues. We worship God and if these statues would `bridge us to Go,’ then we want to connect with God using these statues,” he said.

Quoting the studies of socio-anthropologists Victor and Edith Turner, Ignacio said that the traslacion (the grand procession from the Luneta Grandstand to Quiapo Church) should be viewed as a “pilgrimage” which reaches a phase called “liminity,” or the “experience of the sacred.”

“It is at this point that the pilgrims experience distance and release from mundane structures and institutions where they are placed in their assigned roles and statuses in society,” Ignacio said.

“During the `limen,’ they reach the threshold in and out of time. It is here they receive a `liberation,’ undergoing a direct experience of the sacred, either in the material aspect of miraculous healing or in the immaterial aspect of inward transformation of spirit and personality,” he added.

Ignacio said pilgrims throughout Christian history kept coming back to what they consider as holy sites—like the Quiapo church—because these are believed to be places where miracles happened and could happen again.

“This is the reason why those who experienced pilgrimages keep coming back. It is a wonderful experience to be cleansed, to be one with the peoples, to get in touch with the divine, to experience `heaven’ even for a short glimpse—a kind of `transfiguration,’” he added.

Ignacio said he and the other priests of Quiapo are “humbled” by the intensity and sincerity of the faithful’s show of devotion.

“Maybe, the theological community has not yet fully understood the soul and spirituality of Filipinos. Maybe, our theological paradigms are too western that is why we easily judge the piety of our devotees,” Ignacio quoted one priest as saying.

“One priest even said: `Our theologies might be an elitist theology which we might need to evaluate,” he added.

On the other hand, Ignacio said the Church was correcting the perceived abuses in the popular devotion to the Black Nazarene.

These include reminding mandarasals (persons who receive “donations to say prayers) not to make a living out of it, and getting rid of the manghuhulas (soothsayers) and vendors of anting-antings (amulets), black candles (believed bring misfortune on others), and even abortion pills outside the church.

“These are the abuses that we priests are now fighting against in Quiapo and the priests as well as some lay servants have received their share of threats,” Ignacio said.

He said the Church has also stopped the practice of selling the dried sampaguitas offered in the basilica and the oils used for cleaning the Black Nazarene.

“Other practices that became an issue which our parochial vicar had to attend to include the selling of dried sampaguitas offered in Church as well as oils used for cleaning the Black Nazarene. Some took advantage of this and made money out of it,” Ignacio said.

“The parochial vicar controlled this by instituting procedures and giving this out for free to people who request them. He did not stop the practice but simply corrected the abuses,” he added.

He said the Church had also reorganized the parish and its ministries, doubled its personnel and prioritized formation, liturgy and devotions to “bring about a better and more mature corps of servant volunteers.”

“We are experimenting on ways in our recollection giving with our Mamamasans (those who actually pull the carriage of the Black Nazarene) to bring them closer to God,” Ignacio said.

“Our overnight vigils before January 9 is an attempt to reach out to more devotees hoping to bring the good news and share the teachings with them,” he added.

He said the Church also tried to start a tabloid newspaper, a website, and TV Masses but he admitted that “we haven’t reached even a tenth of them.”

“Whether some expressions are delusional or devotional, it is the heart, the interior of the person, that will often decide if an expression is right or wrong … It is only God who could see through the hearts of these peoples,” Ignacio said.

“I hope, before we make easy judgments about devotions, we must fully understand why people express their faith the way they do. Popular piety involves the whole person, not just the mind. It might me a mystical experience even which we do not understand. We only need to respect them,” he added.