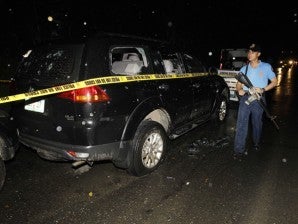 Police pass by the bullet-riddled vehicle of suspected criminals along a road in the town of Atimonan in Quezon province, about 140 kilometers (100 miles) southeast of Manila, Philippines late Sunday Jan. 7, 2013. Philippine army special forces and police killed 13 suspected criminals in a gunbattle Sunday in the latest violence to erupt in the country in the past week. AP/Aaron Favila

LUCENA CITY, Philippines–Supt. Hansel Marantan, the controversial intelligence officer of Police Regional Office 4 in the Calabarzon region, denied on Tuesday that his family has been involved in illegal gambling operation.

“I don’t have any siblings that operate ‘jueteng’ or STL (Small Town Lottery) or any forms of gambling,” Marantan told the Inquirer in a short phone interview from his bed in a Manila hospital.

He described the allegation against him and his sibling by his fellow police officers as “very depressing.”

Marantan hit back at his detractors by insinuating that the police officials who were making the accusation could have been the ones involved in illicit activities.

On Monday, Inquirer sources in the Philippine National Police in Camp Crame and PRO4 headquarters in Canlubang, Laguna, claimed that Marantan launched the operation to eliminate Victorino “Vic Siman” Atienza Jr., a known jueteng operator and “godfather” of STL bookies in Laguna and Batangas provinces.

Atienza was one of the 13 passengers of two Montero sports utility vehicles who were killed by police and Army soldiers in an alleged encounter along the Maharlika Highway in Atimonan, Quezon, on Sunday afternoon.

According to several informants, a sibling of Marantan was allegedly also a jueteng operator and a rival of Atienza in the illegal gambling business in Laguna.

The information gave rise to the suspicion that the Army and police operation, which resulted to the bloody shootout, was allegedly “arranged” by Marantan–by giving the Quezon law enforcers information that a crime gang was passing through the area–to get back at Atienza for encroaching on the gambling turf of Marantan’s brother

Marantan, who was wounded on the left arm and both legs in the alleged gun battle, is now recuperating in a hospital in Manila.

Marantan said the bullets that hit him could have been intended for Chief Insp. Grant Gollod, Atimonan police station chief.

“Gollod was the one who flagged down the first van. I was standing behind him as observer. Then all of a sudden, bullets hailed from the van that unfortunately hit me and spared Gollod,” Marantan said.

He said his doctors had already removed the slug from his wound, one of them pierced through his bone. He said he would immediately submit the slug for examination to determine its gun source.

Marantan admitted that he was in civilian clothes during the operation.

Marantan also refuted the allegation that the supposed intelligence report containing all alleged illegal activities of Atienza’s syndicate (Vic Siman’s Group) that was used as basis for the operation was without the approval of his superiors.

“The intelligence report contains my signature and the signature of Chief Supt. James Melad,” Marantan said.

But Melad, Calabarzon’s police director, in a phone interview Tuesday said he only knew little about the operation.

“Marantan texted me on Sunday morning informing me that they are conducting surveillance on a certain group that carried firearms. My instruction for him was to coordinate with the Quezon police and the station commanders. As to how they coordinated, it’s best you ask the Quezon police director,” Melad said.

Asked if Marantan’s intelligence referred to the same group the authorities encountered in Quezon, he said: “Hindi ko alam ang lalim ng ano n’ya pero matagal na natin tinitingnan ‘yan (I don’t know how solid his information was but we have been looking into this for some time. Loose firearms have been the focus of our attention, especially with an election (coming up).”

A top police official in the Calabarzon (Cavite, Laguna, Batangas, Rizal, Quezon region) police force who refused to be named for lack of authority to speak on the issue, said the operation that resulted in the death of 13 people “was not coordinated” with the Regional Intelligence Division (RID).

“R2 did not know about it. (It) was left in the dark,” the source said. R2 is a term used in the Philippine National Police to refer to the RID.

The source said the intelligence office, in fact, learned about the shooting incident only “after it already happened.”

The source also revealed that the operation was hatched from an intelligence coming from Marantan and was carried out by a joint team from the Quezon provincial police and the Philippine Army.

Marantan is the deputy chief of the RID in Calabarzon.

Senior Supt. Manuel Abu, the chief of the RID and Marantan’s direct supervisor, refused to comment, saying he was not authorized to speak on the matter.

Policemen who were formerly under the supervision of Marantan while he was assigned here in Quezon defended their former superior.

“It’s easy for anyone to make an accusation. But since the one accusing are police officials, I presumed that they have access to intelligence files. Why can’t they identify the name of Marantan sibling who is into jueteng so that the allegation have complete basis?” said the policeman who requested anonymity so as not to earned the ire of his superiors.

A fact-finding team from Camp Crame headed by Chief Supt. Federico Castro Jr. has started to investigate the incident to determine the links of the slain policemen and soldiers to the alleged criminals who were killed in the supposed encounter.

On Tuesday morning, Castro was conducting investigations in Camp Nakar here with policemen and Army soldiers who participated in the operation.

The group proceeded to the encounter site in Barangay Atimonan at noontime and re-enacted the supposed shootout.

“It’s an opportunity to all concerned to help shed light on what really happened. Whatever would be the outcome of the investigation if it will satisfy the public, so be it,” De Leon told the Inquirer.

He refuted the news report that insinuated that around P100 million from the two vans got lost after the shooting.

“That’s a lot of money that could not be just sneaked in and brought elsewhere. It’s baseless news report,” De Leon said.

Citing the information provided by the investigators on the incident report that was also distributed to the media, De Leon said the total amount of money found in the possession of the victims were only around P200,000.

“The money and the personal belongings of all the victims were all properly accounted, no more, no less,” De Leon said.